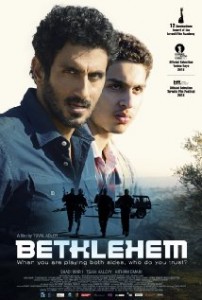 Summary: Exploring the complex friendship between Israeli secret service officer Razi (Tsahi Halevi), and his teenage Palestinian informant, Sanfur (Sahdi Marei), who is also the brother of a senior Palestinian militant, Bethlehem follows Sanfur as he becomes increasingly conflicted, learning of the Israeli plan to assassinate his radical brother.

Greg King: You can check out Greg’s Bethlehem review on The Good The Bad The Ugly Film Show Ep #92

This really seems to be the year when films out of the Middle East have really announced just how strong their film industry is. Both Omar and Rock The Kasbah were brilliant films that used the political unrest and warzone backdrop of the Middle East to great effect. Now comes Bethlehem, a film that not only once again reintegrates the strength of Israeli filmmaking but also announces the arrival of Yuval Adler as a filmmaker who should certainly be watched in the future.

Bethlehem tells the story of a young Palestinian teenager Sanfur (Shadi Mar’i) who finds himself at the forefront of the Israeli-Palestinian conflict when he is recruited by an Israeli Agent, Razi (Tsahi Halevi) to feed the Israelis information about a new terror group that is very much involved with Sanfur’s family.

At times Bethlehem does become a bit of a slow burn but the suspense burns at its audience all the way throughout the film. It fact even during the slower parts of the film the tension is always there. As a filmmaker Adler doesn’t spoon-feed his audience like many American filmmakers would. The film keeps throwing questions at its audience right from the start. Instantly you are hit wondering how this Palestinian teenager has ended up being an Israeli informant and then that suspense remains as it seems Sanfur never really knows who he can trust and who will find out his secret next. Outside of Martin Scorsese’s The Departed there are very few films that manage to keep the suspense going like Bethlehem does.

The other strength that Adler brings to Bethlehem is that he never allows his film to take sides in the Palestinian-Israeli conflict. While Bethlehem may have been Israel’s entrant into the Foreign Film category at the Oscars you could hardly call it a pro-Israeli film. The film shows the dirty tricks and violence that occurs in both the Israeli and Palestinian camps but also seems to suggest that you are never safe no matter how well you to protect yourself.

The only thing that Bethlehem can really be faulted with is the fact that some of the sub-plots are never really brought to completion. One area of the film that held the audience’s interest early on was just how far Sanfur was willing to go to prove to his friends that he was loyal to them, which included being shot while wearing a bulletproof vest, however as the film goes on that part of the story just seemed to fall by the wayside. As an audience member it would have also been nice to have seen the relationship between spy and handler explored a little bit more. Having said that though Bethlehem is a lot more believable as a spy-thriller than any James Bond film.

Strong performances by the leading men, Tsahi Halevi and Shadi Mar’i, and some great directing by debut director Yuval Adler make for a very special film that seems to drift between being a well-written spy-thriller and an old-style Western standoff remarkably well. The film contains a number of scenes involving high tension that would be lost on most debut filmmakers and is a film that strongly deserved its Oscar push.

Other Subculture Entertainment Reviews of ‘Bethlehem′: For our full Bethlehem review please check The Good The Bad The Ugly Film Show Ep #92. You can also read Dave’s Bethlehem review on The Book, The Film, The T-Shirt.

The Good The Bad The Ugly Film Show Podcast Ep #92

This week on The Good The Bad The Ugly Film Show Adam, Dave, Greg and Nick take a look at new release films ‘Postman Pat’, ”Bethlehem,’ ‘The Hundred-Foot Journey,’ Begin Again’ and ‘The Expendables 3’ as well as paying special tribute to the late great Robin Williams, by looking over his career and telling some personal stories about the great man. This episode also contains interviews with Helen Mirren, Mark Ruffalo, Keira Knightley, Arnold Schwarznegger, Sylvester Stallone and Harrison Ford.