[FILM NEWS] PLAYING WITH SHARKS To Screen At Sundance

PLAYING WITH SHARKS, the feature documentary from director Sally Aitken and producer Bettina Dalton, has been selected to screen at the 2021 Sundance Film Festival in the World Cinema Documentary Competition section.

The WildBear Entertainment production is one of only 10 films from around the world to be chosen for this prestigious and highly competitive section.

PLAYING WITH SHARKS is a powerful and visually sumptuous 90-minute feature documentary about Valerie Taylor,  living legend and icon in the underwater world. A glamorous shark hunter in the 1950s, Valerie was a champion slayer with ruthless aim before a personal epiphany transformed her into a passionate marine conservationist – notably for the ocean’s scariest creature, the shark. Long before anyone else, Valerie dared to get close. This is her incredible true story, swimming against the tide of human misconception of sharks and putting herself on the front line for sharks for over 70 years.

Featuring a stranger than fiction script, the making of Jaws, a magnetic heroine, and that most charismatic and terrifying of screen creatures, sharks; the film draws on incredible re-mastered film footage captured over 50 years. Valerie’s astonishing bravery underwater will change the way we perceive sharks once and for all.

Director Sally Aitken said: “To launch this film at the prestigious Sundance Film Festival is a dream come true. Valerie’s daredevil exploits and her astounding rich underwater archive are a potent mix for any director. It is a privilege to sink my teeth into her pioneering story. That she is still diving and fighting for sharks at the age of 85 shows Valerie’s incredible passion and that her thirst for adventure remains undiminished. Her life-affirming journey as an unlikely conservationist proves to all of us just what is possible with our interconnectedness to the natural world, if we allow it.”

Producer Bettina Dalton said: “We are absolutely thrilled and honoured to have this film accepted to Sundance and grateful to all those who recognised the power of Valerie’s story and the importance of honouring her achievements so all can bear witness to the fragility of our oceans and feel empowered to protect them as Valerie has.

Valerie Taylor said: “When my producer told me my story was accepted by Sundance it was the most exciting news in a long and difficult year. It took many talented people to produce this piece of ocean history but without the wonderful footage shot by my late husband Ron this film could never have been made. He would be so very proud. “

When The Queen Came To Town To Screen 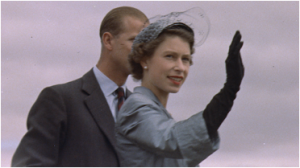 She was young, pretty and very, very stylish, Queen of a quarter of the globe, and the first reigning monarch to visit our shores.

The newly crowned Queen’s maiden visit to Australia in 1954 marked the end of one era and the dawn of another. It was post-depression, post WWII, and pre-TV, and Australians came in their millions to bask in the presence of their monarch who represented hope, romance, and the promise of a bright future. Queen Elizabeth II travelled around Australia for two months and an astonishing 75% of the population turned out to see her.

The 1954 Royal Tour was the biggest event ever staged in this country. The 26-year-old Queen opened parliaments, thanked war veterans, and attended mayoral lunches, glittering balls, horse race meetings and mining and agricultural displays. She waved at millions of Australians who lined the streets and ovals to cheer, wave flags and present well-rehearsed demonstrations of marching, dancing and royal loyalty.  And the cameras were there, as never before, to capture it all.

When the Queen Came to Town stars Australian legends Bert Newton as the Narrator and Lorraine Bayly as the Storyteller  –  but the real stars are the people who were there, who presented the bouquets, drove the limousines, lined the streets, danced, sang and cheered for their Queen. In this new Australian film, they tell us the stories of what it was like to be living in a far flung outpost of Empire WhenThe Queen Came to Town!

Directed by Maurice Murphy (Fatty Finn, The Aunty Jack Show), and Produced by Harriet Pike and Bettina Dalton from Wildbear Entertainment, When The Queen Came to Town begins screening at cinemas around the country from November 6.

More to be confirmed, including metro areas.