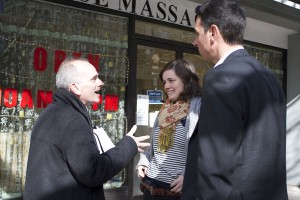 Summary: Falling in love is easy, getting out of it is hard. Our hero, Josh ﬁnds himself ‘LoveStuck’ between his best friend, his ex-girlfriend and the new girl he is about to move in with. As a lowly clerk working with the public service in Canberra, Josh is used to procrastination, but his fear of con*ict and knack for stretching the truth gets him into trouble with the women that he loves.

The Australian film industry has been throwing up some extremely experimental films over the past few years – from one-shot action films through to filmed theatre productions. Well now comes Lovestuck – a completely improvised film from director Murray Fahey (Cubbyhouse, Dags). Not only does the film toss up a story that keeps you guessing but also gives you a look behind the scenes of what goes into making an improvised film at the same time.

The film centres around Josh (Rik Brown – Utopia, Dinner For Three) a man who is struggling with his feelings with three woman – his ex Kate (Rama Nicolas – Little Solider, The Mutant Way), his current girlfriend Cath (Cathy Hagarty – newcomer) and his best friend Trish (Patti Stiles – Neighbours, Stingers). On one disastrous day he meets with Kate to hand back some of her things – which then sets him on a journey to find a pen that she once gave him – while meanwhile Cath and Tess meet for the first time. The result is him having to make a decision about the three woman if he has any chance of moving on at all.

The danger of doing an experimental film like Lovestuck is that sometimes the experiment itself can get in the way of the story or can distract the audience from getting immersed in the film. Strangely, given that the film also shows the audience what is happening behind the scenes at times, neither happens here. The actors at hand – especially Rik Brown – are so good at the improvisation that you forget that you are watching a film that never technically had a script. The scenes flow together well and while there are some scenes that perhaps didn’t need to be there, most of the scenes featuring the main four characters tie in together well and do raise the suspense of who Josh will chose at the end… something that director Murray Fahey let Rik Brown decide as part of the improvisation.

The improvisation of the film does allow for the tone of the film to switch at times which gives Lovestuck a really unique feel. From comedic moments when Josh runs into Cath outside a massage parlour and tries to explain that he didn’t get one of ‘those’ massages right through to more dramatic scenes like Cath and Trish meeting for the first time this is a film that at one moment feels like an episode of Seinfeld one moment and the latest romance drama the next. Even the Hamlet Hip-Hop scene which had the potential of feeling out of place in the film works well because as an audience member you find yourself sitting there thinking ‘do they have the pen or not?’

The key to this film working though was the cast and to Fahey and his casting assistant’s credit they get this 100% right. Rik Brown carries the film throughout and with the tone changes that is no easy feat. From moments of complete awkwardness right through to almost slapstick comedy he delivers each time while Nicolas, Hagarty and Stiles also amazing throughout the film. Not once does there seem to be a moment where they hesitate when they think of what to say next and to be able to deliver improv lines so naturally means they deserve high credit… it is no easy feat.

Lovestuck just shows what you can create when you get together a creative team of people. While an improvised movie sounds like it shouldn’t work this one does to the point where you really do care which decision Josh makes. Worth checking out if you like your cinema a little left of centre.