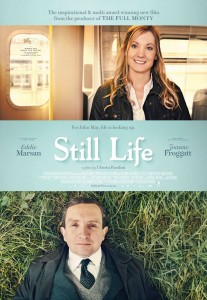 Summary: For over 22 years, life for the unassuming John May has been his work for the local council in South London, finding the next of kin for those in his community who have passed away alone. But in this age of ‘efficiency’, John’s meticulousness and care is no longer deemed necessary, and he is abruptly made redundant. John is left with one assignment: a search for the relatives of an elderly neighbour, Billy Stoke.

As he journeys beyond London to piece together Billy’s past, John uncovers a life of mischief, misadventure, love and regret, most of all for an abandoned daughter, Kelly (the radiant Joanne Froggatt, Downton Abbey) whom John manages to locate. These two insular people are naturally drawn to each other, and as friendship blossoms, John’s outlook opens imperceptibly to life’s possibilities…

Greg King: You can check out Greg’s Still Life review on The Good The Bad The Ugly Film Show Ep #89

Occasionally a film comes a long that is so strong that it makes you sit down and re-evaluate your own life. Still Life is one of those films, this isn’t the kind of film that you will walk out feeling on top of the world. No this is the kind of film that is likely to bring you down a little and you think deeply about what you have watched, but that doesn’t make this any lesser of a film, instead it does exactly the opposite.

Still Life’s main character John May (Eddie Marsan) lives a dull yet fulfilling life. While his personal life seems to be a black hole filled with no romance, no friends and the same boring meals day-in-and-day-out he finds a reason to live because of his job. John works for the local council helping to piece together the puzzle when somebody dies who seems to have no close relatives. However, his world comes crashing down when he is informed by his boss that his services are no longer needed and that his next case will be his final one.

Director Uberto Pasolini (who is mainly known for working as a producer on The Full Monty) overcomes a lot of obstacles to make Still Life a good film. First of which he manages to make one of the most boring men on the planet and likable character for the audience to watch. He sets John up in such a way that you not only feel sorry for him but also that you like him to the point that you want him to succeed. Pasolini is a visual director and it doesn’t take a myriad of writing for him to get his points across about John’s life, likewise he trusts his leading man to be able to us looks and sighs instead of language throughout the film and it works delightfully well. The introduction of some subtle black comedy also helps the audience from completely slipping into a full bout of depression.

Pasolini also seems to have been on a mission to make an anti-Hollywood film with Still Life. Yes he introduces a bit of a love interest for John with the introduction of Kelly Stoke (Joanne Froggatt) but is gifted enough to prevent this from ever becoming your full on Adam Sandler/Drew Barrymore style romantic comedy, and for that he deserves credit. But the proof that Pasolini wanted to make a film that went against the main grain is his ending. While not wanting to give too much away Still Life has an ending that you certainly don’t see coming but will stay with you a long time of the credits have dissolved.

The big allie that Pasolini had in making Still Life work was his leading man Eddie Marsan. Often Marsan is the comedy sidekick to bigger names in films like The World’s End, or just goes along for the ride in big blockbusters like Snow White & The Huntsmen and Jack The Giant Slayer but here Marsan once again reminds audiences that he is a strong character actor who truly deserves more leading roles. The morose look that Marsan wears throughout Still Life would have been taxing on any actor but he pulls it off well with a performance that deserves a lot more credit than it has received.

Still Life is one of those sleeper hits. It’s one of those films that you notice has just opened at the cinema but for some stupid reason you keep on putting off from going to see, then when you do see it you can’t stop talking about it with your friends. Still Life is melancholy and downright depressing in parts but it is also a film that will stick with you. Just be warned it is impossible to watch Still Life and not find yourself becoming emotionally involved or affected from it.

Other Subculture Entertainment Reviews of ‘Still Life′: For our full Still Life review please check The Good The Bad The Ugly Film Show Ep #89. You can also check Dave’s review at The Book The Film The T-Shirt.