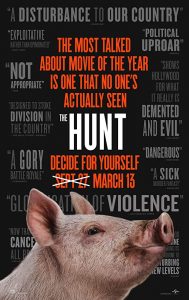 Summary: Two women face off as a deadly game called The Hunt goes completly off track.

OUR THE HUNT MONSTER REVIEWS & RATINGS:

In a year where people have learnt to embrace films in ways that they haven’t previously the one genre that seems to have topped all others has been the horror genre. While The Wretched topped the US Box Office just before the lockdown Leigh Whannell’s The Invisible Man found itself scoring five star reviews from some of the world’s top film journalists.

While those two results seemed to surprise fans of the genre the film they were eagerly anticipating was director Craig Zobel’s (Compliance) The Hunt. The excitement around the release was hardly surprising – Zobel’s post-apocalyptic thriller Z For Zachariah is one of the most under-rated films of the last decade while The Hunt was the latest film to come out of Blumhouse stable, a production company who rarely produce a dud.

The film itself is basically an adult version of The Hunger Games with some extra quirk thrown in for good measure. The opening scenes of The Hunt pretty much The Hunger Games but do quickly establish that characters like Crystal (Betty Gilpin – Stuber) are involved in a deadly game that has been set up by the mysterious Athena (Hilary Swank – Million Dollar Baby) But what exactly is the game that Crystal has found herself in? And why the hell has Athena set something up some vicious and cruel?

Those are the questions that the audience are asked to explore, but to be honest the road to getting those answers is un-original and at times plain boring. While the screenwriting team of Nick Cuse (Watchmen) and Damon Lindelof (Lost) try to give the film its own originality with some quirky Kevin Smith style black humour it does nothing to lift any interest in the film’s plot at all.

While the idea of losing characters on mass and at a whim throughout the early stages of the film may have made the script look like a horror film with a difference it just doesn’t work on the screen. Introducing characters and then having them killed or disappearing straight away makes it nearly impossible for the audience to get a vested interest in the film. It is also does nothing but waste the talents of quality performers like Emma Roberts (We’re The Millers).

While the film does gain a little bit of traction when it becomes a battle between Crystal and Athena even that comes to a crashing end with a lacklustre finale that any decent horror fan will have seen close a film a million times previously. To be honest that little battle royale comes a little bit too late for the interest of the audience as well. The film’s inability to engage its audience early on really does mean that you never really care for Crystal the way you should and again there are a lot of scenes throughout the film that are just too similar to other recent films like Peppermint.

The only winner out of this film is the star Betty Gilpin. While everyone falls around her her performance as Crystal is enough to at times back you forget the clichés that is holding the film back. She brilliantly delivers whatever is thrown at her – action, gore and black comedy. Her scenes with Hillary Swank are at times the only things making the film watchable and for that Gilpin deserves a lot of credit.

The Hunt never really lives up to the hype that came before it. Fans of genuine horror will give it a wide berth after just one viewing while it’s quirkiness and gore is probably enough to put off the casual cinema goer. If you’re looking for a decent gorey, catch-me-if-you-can horror then bypass The Hunt and try to find a way to watch Tony D’Aquino’s The Furies instead.

The Hunt is rated 18. It is available on a number of streaming services and will open in select Thai cinemas on August 12th.

Other Subculture Entertainment The Hunt Reviews: