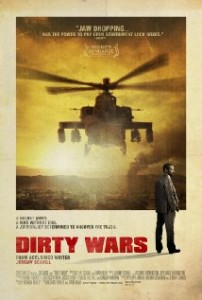 Summary: Jeremy Scahill is the National Security Correspondent for The Nation but is better known as author of the award-winning Blackwater: The Rise of the World’s Most Powerful Mercenary Army. In this latest piece of searing investigative journalism, he turns to exposing America’s officially sanctioned black-ops assassination squad.

What he uncovers is “game-changing, mind-blowing” stuff, as the Huffington Post put it, in which the key player is the Joint Special Operations Command, one of the most shadowy elite forces on the planet. As the team responsible for killing Osama Bin Laden, they’ve already achieved notoriety but Scahill opens up the full scale of their covert operations. He reveals that they report only to the White House, which empowers them to “find, fix and finish” their targets (often without due process), and that their kill list includes US citizens. Persuasively researched and engagingly presented, Dirty Wars is an explosive film as arresting as any Hollywood feature.

Please check Greg’s review of ‘Dirty Wars’ that is available on www.filmreviews.com.au