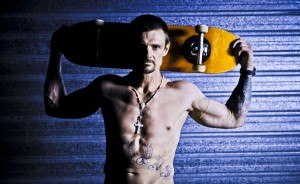 Summary: Brothers Tas and Ben Pappas, two boys from Melbourne who took the skateboarding world by storm, defeated Tony Hawk and were crowned International World Champions within a year. Skateboarding came naturally to the Pappas brothers, but success was a different story. In this unflinching, never-before-seen account we witness the dark consequences of Tas and Ben’s rapid success, their intense fraternal bond and their journey from the pinnacle of their sport into a downward spiral of self-destruction. From the makers of award-winning documentaries Exit Through the Gift Shop and Senna and featuring fascinating interviews, first person accounts and archival footage, All This Mayhem is a searing account of what happens when raw talent and extreme personalities collide and tells of a tragedy too incredible to believe.

OUR ALL THIS MAYHEM REVIEWS & RATINGS:

Nick Gardener: You can check out Nick’s All This Mayhem review on The Good The Bad The Ugly Film Show Ep #87

The sporting world is littered with fallen stars. Names such as O.J. Simpson, Diego Maradona, Mike Tyson and Ben Cousins are all heroes that reached the pinnacle of their sports only to then find themselves on the front page of newspapers for their drug fuelled criminal indiscretions rather than their feats in their sporting careers. Two more people whose names should be added to that list are Ben and Tas Pappas. Sure the names may not been much to people outside of the skateboarding world, but after watching director Eddie Martin’s new documentary All This Mayhem they are names you will never forget as this harrowing documentary becomes etched in your mind.

This isn’t just another sports docco this is aA warts and all look at the rise and fall of Ben and Tas Pappas the two young Australian skateboarders who travelled to the United States and stole the World Championship Crown from world #1 Tony Hawke. All This Mayhem chronicles the rise to this point but then also follows as both brothers begin a decline due to a drug addiction that has ended up resulting in jail, depression, murder and suicide.

Too often these kinds of documentaries will look at the highs of a sportman’s life and then just briefly mention the lows, or look the lows but make sure there is a high to go out on. Martin’s All This Mayhem though isn’t that kind of documentary. Yes he watches as the two boys from suburban Melbourne break out of their rough lifestyle and conquer the world but he also stays with the story when both brothers finds themselves facing jail time for drug smuggling and ultimately watch their careers go down the drain.

What makes All This Mayhem such a captivating watch is the time and effort that Martin has spent in gathering and putting together some of the footage to create this story. From the handheld footage captured by a family friend while the Pappas brothers were learning to skate in the late 1980s, through to the moment they took the crown from Tony Hawke and then the harrowing footage of watching Ben facing court for drug smuggling and facing a murder investigation. Somehow Martin even found footage of the pair appearing very, very wasted on the set of the family entertainment show Hey, Hey It’s Saturday. It’s footage like this that clearly shows the audience that something is going horribly wrong and stays with you.

To Martin’s credit he doesn’t leave any side of this story untold, he has gone through hundreds and hundreds hours of footage that was captured by the Pappas brothers’ friends when they growing up and then has even in depth interviews with Tas while he is in prison and manages to uncover some home truths about the normally untouchable Tony Hawke. Martin is a good enough director to allow the story to evolve as he discovers more while talking to some of the Pappas Brothers’ friends and associates but also knows not to let it deviate the documentary from telling the story it is supposed to tell… that of the demise of the brothers themselves.

All This Mayhem is certainly not just another skateboarding documentary, this is a hard hitting film that takes a look at just how a sportsman can really fall from grace. It not only shows the dark side of a sport that many would consider to be a clean sport but also shows a dark side of humanity. It reveals what can happen when success really gets to somebody and is so hard-hitting it deserves to be mentioned alongside great sporting documentaries like Senna.

The Good The Bad The Ugly Film Show Podcast Ep #86

This week on The Good The Bad The Ugly Film Show Adam, Dave,  Nick and Greg take a look at new release films ‘Calvary’, ‘Rock The Kasbah’, ‘Jersey Boys,’  and ‘Belle And Sebastian’. This episode also contains interviews with Eddie Martin about his fantastic new documentary ‘All This Mayhem.

Also listen for your chance to win a copy of 12 Years A Slave on DVD thanks to Icon Distribution.

All This Mayhem Interview

The Good The Bad The Ugly Film Show’s  Dave Griffiths caught up with Eddie Martin the director of new documentary All This Mayhem.

You can hear the All This Mayhem interview here.