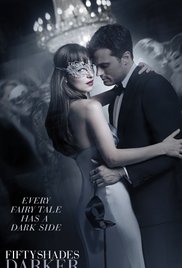 Love it or hate but the Fifty Shades franchise is one of the biggest movie series in the world at the moment. As is the way with these blockbuster franchises they also make actors household. Think Harry Potter with Daniel Radcliffe and Emma Watson and think of Twilight with Kristen Stewart and Robert Pattinson and you’re on par with what Jamie Dornan and Dakota Johnson are going through at the moment.

Dornan is making a name for himself as the handsome, very sexual but also very damaged Christian Grey while Dakota Johnson plays Anastasia Steele the eager, young submissive that he has fallen in love with. Together they have become two of the most recognisable actors on the planet and now have a legion of fans behind the franchise.

While talking about the latest film in the franchise to hit cinemas – Fifty Shades Darker – Dornan says that appearing in the franchise and coping with its popularity has helped him form a special bond with co-star Dakota Johnson. “What’s a great thing about Dakota is that only she knows what I’m going through, and only I know what she is going through. We both really need each other through this process because there are days when it is not that easy, and there is a lot being asked of us. I think a lot is being asked of her, particularly with the physical stuff as she is normally wearing less of what I would be although that is kind of changing in these two movies but you need to have that person that understands and has been there with it since day one as well.”

One of the controversial storylines to surface in Fifty Shades Darker is the story of the fact Christian was sexually abused by his mother’s best friend Elena (Kim Basinger) so how does Dornan answer the question that a lot of fans are asking – ‘why doesn’t Christian just steer clear of Elena?’ “I think in some ways he still needs her,” says Dornan after some thought. “She still understands him; I think she is one of the only people that he can talk to. Christian really doesn’t have any friends, like he doesn’t have a group of guys that he grew up with like most normal people do. For me, I have the same group of mates I’ve had since I was a kid and I could call them up about anything, but he doesn’t have that support network. Elena he would use as that, someone to talk things through to you know, someone that can help him understand situations and someone that he feels understands him.”

That leads to asking about the damage that she has done to Christian which has left him with traits including his controlling personality. “There is a part of him that can be completely unhinged,” he says looking down. “To control that he is actually very controlling in everything that he does.”

Of course, the other side to this love affair is Dakota Johnson’s Anastasia – so would she say Christian and Anastasia are firmly in love now? “There are components of sensuality and sexuality,” she agrees using her hands to illustrate the two sides. “But it is primarily a love story between people that are so intricate and so intelligent and so multi-faceted that even the different aspects of their personality and the different aspects of their life, whether they be family or work or sexual preferences are all kind of in orbit around the fact that they are just madly, deeply, fiercely, severely in love with each other.”

That statement might confuse those who are of the belief that the relationship ended in the final scenes of the last film so what brings Christian and Anastasia back together this time around? “They decide that they will try and work things out if he becomes more honest and open with her,” Johnson explains. “That was really all she wanted in the first place. How the last film ended was quite heavy on Anastasia, and I think that the fact that it was so intense and such an awful thing happened, and she still wants to go back, so that is a real testament to just how strong their love is.”

In the early days of the franchise, a lot of people criticised it for being sexist yet along the way we have seen Anastasia grow as a character that is something that Johnson agrees with. “I feel so lucky to be able to play a young woman who not only experiences so much and has such a journey but also becomes someone of such honour and substance and grace and elegance, and there is nothing thankless about her, and I love that. In the first movie Anastasia is quite nubile and innocent and virginal and soft, and I think through this exploration of her love for this man and through her exploration of herself and what she wants in her life, whether that is becoming a figure of authority in her workplace and also becoming more comfortable with her sexuality I think she discovers this strength within her is so extreme and is so powerful and that makes her be able to match Christian.”

The big change this time around is the inclusion of experienced director James Foley, and Johnson says he was great to work with, something that added with her trust for Jamie Dornan helped throughout the film. “Jamie is this wonderful, hilarious and talented human and we also have this kind of friendship that is… we built it around trusting each other so it wasn’t something that was like ‘oh I realise years later that I can trust you.’ Foley is a really great director, and he has such trust with his cast members that it sort of instills this kind of freedom, and that’s really lovely, and he’s a really nice person, and he is nice to be around, and he doesn’t have this outrageous personality and he isn’t like… you know. The set has a very, very mellow vibe.”