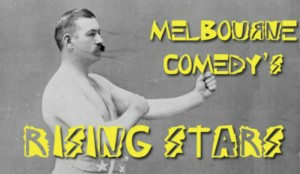 With Melbourne Comedy’s Rising Stars returning to Melbourne for another bout Dave Grifftihs caught up with the host of the night, Michael Shafar to see what he has in store for everybody this time around.

You can listen to or download our Michael Shafar interview right here.

After SOLD OUT shows, Melbourne’s hottest line-up of emerging comedians is back with a very special line-up of comedians from TV and radio!

The secret to the show’s success lies in its curation. Melbourne Comedy’s R ising Stars is dedicated to introducing comedians who are on their way up. These are comics who have performed to sell-out crowds internationally, all over the country and at the Melbourne International Comedy Festival.

See the future of Australian comedy on one stage. Bookings are highly recommended.