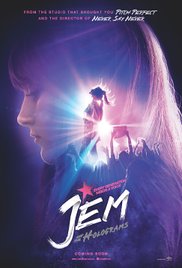 Summary: As a small-town girl catapults from underground video sensation to global superstar, she and her three sisters begin a journey of discovering that some talents are too special to keep hidden.

OUR JEM AND THE HOLOGRAMS REVIEWS & RATINGS:

Jem And The Holograms is a film based on Hasbro’s super popular doll line of the Eighties, which had a cartoon series still loved to this day. The screenplay of this film was written by Ryan Landels and the film was directed by Jon M Chu.

The story revolves around the orphaned Jerrica who grows up with her little sister, Kimber, and 2 adoptive sisters, Shana and Aja, in a house where music is cultivated as a way to bond. She becomes an online sensation overnight when she dons a pink wig and performs a song under the name ‘Jem’.

When I heard that Jem was going to be done as a live action movie I was so excited. I loved the cartoon when I was a child. I t was the essential Eighties cartoon – full of music, colour, crazy style but with real heart at its centre.

Then I saw the trailer for the movie. What was being advertised was absolutely nothing like Jem – it was just using the name. I’m pretty sure this pissed-off a lot of people and the film’s release suffered for it.

However, having just watched the DVD release, I have to say it was not as horrible as I feared. Synergy was there as a character, albeit a little different to the original, as was Jerrica’s backstory, slightly tweaked…

So why was I shown a completely boring ‘I-want-to-be-on-American-Idol’ type trailer to advertise the movie – with almost none of the classic Jem elements and characteristic details?

Despite this, the film does offer good fan-service throughout the film; a lot of characters and elements from the show appear. Some elements are not used enough, such as the classic Jem “truly outrageous” style. This appears briefly at the start and gets our hopes up… only to be watered down when they hit stardom.

The filmmakers have created a story about finding the ‘real you’ and being courageous enough to be yourself and follow your dreams. To sell this, we not only follow Jerrica’s journey to becoming Jem via her online video, but other ‘everyday people’ are shown throughout the film with their video uploads. This is meant to be an inspirational “we are all Jem” idea, showing that everyone can make their dreams come true.

Whilst I applaud the idea and lesson, I have to say that all those videos were annoying and detracted from the narrative. More time spent ‘showing’ Jem’s effect rather than a bunch of low-quality home video scenes of people saying how inspired they are would have been more beneficial.

Overall, the story was good and engaging but suffered from lazy and predictable moments later on. At one point the band falls apart, but all is forgiven without any kind of prompting a few minutes later. Character-wise, the movie starts good and builds each of the main characters, then becomes all about Jem and the others start to become background elements.

Jerrica’s biological little sister, Kimber, is the catalyst for the events and is built up at the start. Jerrica finds clues left by their father and follows them as her personal journey and, apparently, is nothing to do with Kimber. A message from their father at the end is all directed at Jerrica, only acknowledging Kimber at the very end.

Fans of Jem will have been wanting to see the Misfits in the movie. They’re not the main antagonists as you might have hoped, but do appear in a mid-credits bonus scene (with Pizazz played by Kesha) obviously intended to set-up a sequel. Their absence did not bother me, though, as it made sense to set Jem up as a star before introducing rivals.

I hope we actually do get a sequel, but with stronger writing (I’ll do it!) and ‘style’ showing it to be a bit more faithful to the franchise – especially in how it’s advertised. I hope they make the effort to set it straight and actually make Jem ‘truly outrageous’, which she really wasn’t in this film.

A nice touch might have been to update the old theme-tune. The music was good in the movie, but it should have been more striking and utilised more than it actually was for a film about a musician. It was disappointing to see her turned into a Lady-Gaga-clone at one stage – although this could have been a device used to show her becoming unpopular when they tried to change who she fundamentally was; you missed something there, Hasbro Studios!

Performances by the cast were generally strong, given what they had to work with. At times the film did not know if it wanted to be funny or feely and could have been executed better. Our heroine played her part well but we would like to see more opportunity to be the striking character and talent that she is built up to be (more the script’s fault than the actress’).

This film deserves 3.5 out of 5, with plenty of room left to be truly, truly, truly outrageous.

Other Subculture Entertainment Jem And The Holograms Reviews: Nil