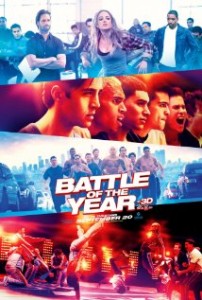 Summary: An American b-boy crew heads to France to compete at the Battle of the Year International Championships.

OUR BATTLE OF THE YEAR REVIEWS & RATINGS:

Please check Greg’s review of ‘Battle Of The Year’ that is available on www.filmreviews.net.au

The whole dance film genre has become a little bit of a joke over the last few years. You realise that when you can sit down with a friend and try to predict what is going to happen before you go into a film such as “Battle Of The Year.”

Films such as “Streetdance” and “Step Up” have really just been working to a pretty basic formula for the past few years… so much so in fact that you can nearly predict when and what exactly is going to happen. They’ll be an underachieving crew that needs to have some discipline brought in before a major event, two people will fall in love and that will cause problems and then of course there will be the dramatic moment of someone having to pull out at the actual event because a secret has been revealed around them.

Well obviously it wasn’t just the cinema going audience that became sick of this formula because with “Battle Of The Year” director Benson Lee takes that normal formula screws it and throws it in the bin. It is obvious that Lee wanted something different with this film, and in doing so he’s created a much better film for film lovers.

Surprisingly “Battle Of The Year” is a dance film that has a plot. The film opens with one of the most celebrated B-Boy dancers of all time, Dante Graham (Laz Alonso), absolutely disgusted at the fact that the genre of dance that he once created is no longer considered cool. Worse still is the fact that whenever the Americans compete in the annual ‘Battle Of The Year’ competition in France they never even make the finals anymore.

Dante decides to do something about it so he calls in is damaged friend Jason Blake (Josh Holloway), a gifted basketball coach who has turned to alcoholism to deal with the pain of losing his wife and son in a car accident.

Despite hesitations Date soon as Blake looking at the current U.S. team but to everybody’s shock Blake sacks the entire team and decides to start looking for a whole new crew. Dante decides to let him and soon Blake is working with the likes of Franklyn (Josh Peck) and Stacy (Caity Lotz) to hastily mould this team into something that will be competitive at the big event.

Of course some of the dancers have problems and they clash with Blake and his hard-lined training methods. Then there are Rooster (Chris Brown) and Do Knock (Jon ‘Do Knock’ Cruz), the two most talented dancers in the crew, but the fact they hold a grudge with each other threatens to derail the entire crew before it even has a chance to compete.

Okay so it would be a lie to suggest that Benson Lee has created anything that deserves to be award nominated, but he does do enough with “Battle Of The Year” to make it different to the other films in the genre. He develops back stories for a lot of the characters, he even has Blake having all the traits of a Darren Aronofsky character, he removes the clichés such as the predictable love story and even decides to remember that a dance film needs a ‘film’ element to it and creates characterisation and plot. Yes he dares to make dance secondary to plot.

To his credit Lee also takes some huge risks with this film. He bases his plot formula on the sports films such as “The Mighty Ducks” or “Coach Carter” and as a result ends up with a film that won’t exactly put those not into dance to sleep. He removes his characters from the sexy U.S. street setting and places them in a bland prison and has topics such as teenage fatherhood and alcoholism bubbling away under the surface – he doesn’t focus on them but has them simmering away providing tension without too much effort.

“Battle Of The Year” also separates itself from other films in the genre by allowing the actors to do what they do best – act!!! Josh Holloway seems to relish getting to play a ‘tragic’ character while Josh Peck and Caity Lotz do their thing without exactly setting the world on fire.

The bit of grit to the script allows for Laz Alonso to bring some dramatic grunt to his role (didn’t expect that in a dance film) while newcomer to the acting stakes Chris Brown doesn’t turn his performance into the car-wreck that many thought he would deliver. The controversial star seems to enjoy playing a headstrong, vain dancer and does little wrong in the portrayal.

“Battle Of The Year” certainly ain’t film of the year but it doesn’t even close to becoming one of the worst films of the year either. Credit must be paid to Benson Lee for daring to do something a little different in the dance film genre.