Dane Millerd To Shoot In U.S. 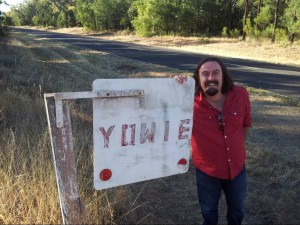 Bohem Films’ Rob Jacobs and Dane Millerd (Writer/ Director/ Producer of There’s Something In The Pilliga) have teamed up with Sharry Flaherty and the team from Dark Water Productions to bring you the low‐fi mumblecore suspense thriller Are You Scared Yet?Inspired by films such as The Strangers and Funny Games, the film is currently in re‐production and slated to be shot in the Nevada desert in early 2016.“The Dark Water team are currently finalising cast, investors and locations,” saidwriter and co‐director of the film Dane Millerd.“They have been tremendous so far and we can’t wait to work with them!”For Dark Water Productions, Sharry Flaherty, it is another positive step as the company continues to churn out quality content to their burgeoning international audience. Flaherty has just finished shooting the highly‐anticipated Khali the Killer with 2015 Emmy nominee Richard Cabral from End of Watch and Paranormal Activity: The Marked Ones).“When Black Wolf Media (distributors of There’s Something In The Pilliga/ HalfHuman) contacted us about this crazy script from Australia we jumped at it,” she said.

“It is taut and creepy and we can’t wait to start production on it with the Bohem Media guys!”The movie examines the lives of Tom and Kat, who’s troubled marriage has reached breaking point when Kat discovers Tom’s infidelity while their son Jonah is on a school field trip. Little do they both know that a terrible twosome known as the Knockturnals have been watching them for weeks, waiting in the wings to invade their home and their lives. What Tom and Kat don’t know is why the Knockturnals have infiltrated their private lives nor do they have any inkling of their real, gruesome intentions.“Without giving too much away, we are currently talking to some top talent in the US about being involved in the film,” said Millerd.“This film is going to blow people away!”

There’s Something In The Pilliga Interview

The Good The Bad The Ugly Film Show’s Dave Griffiths catches up with director Dane Millerd to talk about his new film There’s Something In The Pilliga which is screening at Monster Fest.

You can download or listen to our There’s Something In The Pilliga interview here.

This week on The Good The Bad The Ugly Film Show Adam, Dave, Greg and Nick take a look at new release films ‘Exists’, ‘Maps To The Stars,’ ‘The Hunger Games: Mockingjay Part 1,’ ‘Rock The Casbah,’  and ‘The Dark Horse′ . Dave and Greg also take a look at two films screening at Monsterfest this week ‘Honeymoon’ and ‘There’s Something In The Pilliga’. This episode also contains an interviews with Robert Pattinson, Jennifer Lawrence, Liam Hemsworth, Angus Sampson, Hugo Weaving, Neil Foley, Daniel Armstrong and Iqbal Barkat