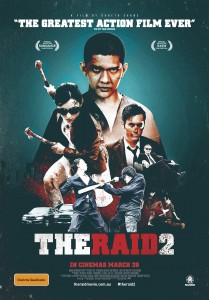 Summary: Following immediately after the events of the acclaimed bone-crunching Indonesian thriller THE RAID, one-man army Rama (Iko Uwais) is forced to reinvent himself as an undercover cop in order to provide protection for his wife and child. Working for an anti-corruption task force led by the one person he can trust, Bunawar, he is given a mission to engage himself as an enforcer for the local underworld. Finding a way in through mob boss Bangun’s power-hungry and increasingly unhinged son Uco, Rama must hunt for information linking Bangun’s mob with police force corruption. As escalating power-plays ignite a war between factions determined to rule Jakarta, the highly-skilled Rama might be the only man capable of standing in their way.

OUR THE RAID 2 REVIEWS & RATINGS:

You can check out Adam’s The Raid 2 review on The Good The Bad The Ugly Film Show #73.

You can check out Nick’s The Raid 2 review on Built For Speed.

The first film in The Raid franchise turned the art of the action movie on its head forever. Nobody went into it expecting much, it was a low budget Indonesian film from a director that nobody really knew. But any action film buff who saw it, came out of the cinema declaring that it was the best action films of all time and that director Gareth Evans deserved to be labelled as an absolute hero. The body count was high, the action sequences were new and different and something that is normally missing from a good action film, a decent storyline, was also present. Now comes The Raid 2 and the big question is can Evans re-capture the magic of the first film or will its fans be severely let down?

The Raid 2 kicks off pretty much where the first film leaves off. Our hero the rookie cop, Rama (Iko Uwais) is given no time to relax at all. Instead, excited about the young cop has done Bunawar (Cok Simbara) a cop hell-bent on stamping out Police corruption recruits Rama to go undercover and bring down the rest of the corrupt Police Officers in Jakarta and the two biggest crime families that fuel them.

Much to his sadness Rama has to bid his family farewell and go immediately undercover in one of Indonesia’s toughest jails so he can befriend, Uco (Arifin Putra), the son of one of Jakarta’s most notorious gangsters, Bangun (Tio Pakusodewo). Rama finds himself in a baptism of fire in the jail but it works and soon he becomes a close friend and right hand man to Uco.

On release from prison Rama’s newfound role finds him right in the middle of the turf war between the family crime syndicate run by Bangun and another run by his arch rival Goto (Ken’ichi Endo). While the two families have been at peace for years, that era is ruined by the arrival of a wannabe gangster with high ambitions, Bejo (Alex Abbad).

When thinking up the storyline for The Raid 2 director/screenwriter Gareth Evans reveals himself as a very smart man indeed. The new film means he loses one of his most important allies of the first film – the claustrophobic feel that the film delivered because it was set in the one apartment building. Evans realises that it he is going to lose that element of suspense with The Raid 2 but brilliantly weans his audience off the feeling but setting a large chunk of the beginning of the new film inside a prison. To his credit though the film also never loses any of its suspense even after Rama is outside the prison gates and that comes down solely to the fact that Evans has made Rama a character the audience really loves and that it seems that his life is constantly in danger.

As I previously mentioned one of the big things to hit the audience from the first film was the directional talents of Gareth Evans, and in The Raid 2 I am happy to say that he even surpasses the skills he showed in the first film. Once again the violence here is brutal but Evans almost makes it an art form. Not only does he make every choreographed fight scene seem like organised chaos (and almost like a ballet) but along the way he also brings in some very creative mid-action shots that are going to put some of the top Hollywood directors to shame. Two shots really stand out, the sensational shot of when Rama has just busted open the porn studio and then while fighting the studio boss he throws him through a window and the camera goes through the window with him, lands and keeps shooting. Then there is also the sensational shot during the brilliantly directed car chase sequence where it seems that the vehicle that the camera is mounted to goes straight over the top of a stuntman thrown from a vehicle.

It’s through his creative style as a director that Evans brings a whole new feeling to his audience during The Raid 2. This style of filmmaking really makes the audience feel that they are part of the events that are going on right in front of them. It makes you feel like you are not in a cinema but instead are there amongst the chaos and mayhem of Rama’s Jakarta. Yes once again Gareth Evans shows why he must now be considered one of the best action directors in the world at the moment, and all action films must eagerly await the day when he gets the chance to work with a huge Hollywood budget on an American action film.

With all the credit that is paid to Evans though a lot must also be heaped onto his leading man Iko Uwais. Evans puts Uwais through absolute hell during this film. With the amount of fight scenes he is forced to deliver this time around you can only imagine that after every day on the set his body must have been bruised and sore. Like Evans he also announces himself as a future star of the action genre and you can only wonder whether or not he may one day get a call from Sylvester Stallone about appearing in one of The Expendables film. Another cast member from The Raid 2 who deserves a mention is Alex Abbad who plays Bejo, an interesting gangster who with all his mannerisms wouldn’t have seemed out of place in a Quentin Tarrantino crime flick.

A lot of people will ask whether The Raid 2 is better than The Raid? It is a difficult question to answer because they both brilliant in their own way. The first was sensational because it was new, different and showed what a good director can do with such a small budget. The second film is also sensational because it continues to show how Evans is evolving as a director. The stunts and action sequences are bigger and that ever present suspense is still there to haunt the audience. The only way to sum up is to say that The Raid 2 is equal to The Raid and once again is going to be a film that will be adored by action film fans right around the world.

Other Subculture Media Reviews of ‘The Raid 2′: Nil.