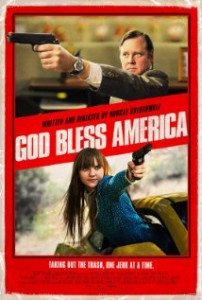 Summary: Divorced, recently fired, terminally ill and driven crazy by his white trash neighbours, Frank (Madmen’s Joel Murray) has nothing left to live for. Instead of taking his own life he hits the road in-search of the cruelest, stupidest people he can imagine with a plan to eradicate them not only from society but also the media. Beginning with a plan to end the televisual reign of a bratty teenage star that makes the Kardashian sisters look grounded, Frank finds an unusual accomplice in high-school student Roxy (Tara Lynne Barr). Sharing Frank’s sense of disenfranchisement, Roxy and Frank fashion themselves as a modern-day version of Bonnie and Clyde before embarking on a nationwide assault on America’s most irritating celebrities.

Bobcat Goldthwait! Most will remember him as the crazy voiced actor who made them laugh in the classic Police Academy series of films. Few will know that he has also made a career for himself as a director of both so pretty good television shows and films. Now comes God Bless America the pinnacle of his career, but does it stack up as a good watch?

God Bless America centres around Frank (Joel Murray – TV’S Mad Men & Desperate Housewives) a man whose life is slowly going downhill. As if his marriage to Alison (Melinda Page Hamilton – TV’S True Blood & Modern Family) ending and seeing his daughter, Ava (Mackenzie Brooke Smith – Deadtime Stories: Grave Secrets, TV’S Desperate Housewives) turn into a spoilt brat isn’t enough, he has now found out that he is dying from a brain tumour, has unfairly lost his job and his uncaring neighbours annoy him in every possible way.

As Frank watches a string of trashy television shows he realises just how bad the world we live in is and due to the fact that he is dying anyway decides that he is the one person that can do something about it. At first Frank decides that he will just gun down one particular annoying reality star, Chloe (Maddie Hasson – TV’S Grimm & The Finder) and that will be his work done. But after meeting Roxy (Tara Lynne Barr – TV’S The Bold & The Beautiful and The Suite Life Of Zack And Cody), a young teenager who shares a lot of the same ideas as him, they decide to go on a rampage across America ridding society of everyone that is dragging it down.

There are some parts of God Bless America that work remarkably well. Goldthwait uses this film for the same therapeutic outlet that most people use ‘Letters To The Editor’ columns for, and for the most part you find yourself agreeing with what he has to say. Yes there are some Hollywood celebrities that have done questionable things in their lives, yes reality television stars are often annoying and yes there should be special punishments reserved for those that decide to use a mobile phone in a cinema.

So technically Goldthwait is making the points that the masses want to say but Goldthwait pushes his luck too far with the character of Frank. While many can understand why he goes on his rampage the audience finds themselves pulling back from the film as Frank’s reasons for killing people start to get thinner and thinner. The film begins with everybody on side with Frank but the audience begins to lose interest when they no longer support Frank.

The one thing you can’t fault with God Bless America is the performances of the lead actors. Joel Murray shows that he is an equally good actor as his brother Bill while Tara Lynne Barr really announces herself on the acting scene. She puts in some genuine dramatic moments and is the new Ellen Page.

God Bless America holds your interest for a little while but your attention starts to drop as the movie goes on.