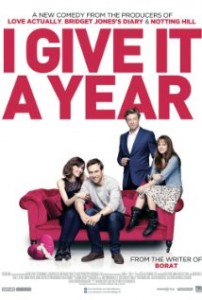 Summary: Starting where other romantic comedies finish, I GIVE IT A YEAR charts the trials and tribulations of a rather mismatched couple navigating their first year of marriage.

Since meeting, ambitious high-flyer Nat (Rose Byrne) and struggling novelist Josh (Rafe Spall) have been deliriously happy despite their differences. Josh is a thinker, Nat’s a doer… but the spark between them is undeniable. Their wedding is a dream come true, but family and friends think they won’t make it. When Josh’s ex-girlfriend Chloe (Anna Faris) and Nat’s handsome new client Guy (Simon Baker) come into the picture, the situation gets a little more complicated. Neither wants to be the first to give up, but will they make it?

Dave Griffiths’s ‘I Give It A Year’ Review:

For some of the reason it is always the British that rise to the task of delivering a decent comedy, and this time that decent comedy is ‘I Give It A Year’… a film that may be an anti-romance film but is still a cut above most of the romantic comedies that make it to the big screen.

The film begins with the wedding of Nat (Rose Byrne – The Place Beyond The Pines, TV’S Damages) and Josh (Rafe Spall – Life Of Pi, Earthbound), a marriage that almost seems doomed from the start as the priest chokes at an important time and the reception is kind of ruined by the best man, Dan (Stephen Merchant – Movie 43, Hall Pass) whose jokes go down like a lead balloon.

Flash-forward to nine months down the track and now Nat and Josh’s marriage has already hit the skids. The pair decides to try marriage counselling, which almost seems like a mistake seeing they end up being counselled by a counsellor (Olivia Colman – Hyde Park On Hudson, TV’S Accused) so inept at her job she does more damage than good. Their marriage is then further tested when Nat’s new advertising client turns out to be charming American, Guy (Simon Baker – Margin Call, TV’S The Mentalist) while Josh seems to spend more and more time with his ex-girlfriend Chloe (Anna Faris – Movie 43, The Dictator).

Director/screenwriter Dan Mazer (TV’S Dog Bites Man, TV’S Da Ali G Show) does do a lot to make sure ‘I Give It A Year Works’, some of the jokes work a treat but there is still a massive flaw in this film. Like so many comedy films seem to do these days the actors have been directed to pause after they deliver a funny line, works well when the audience is laughing, but too many times in this film that pause is filled with sound of crickets and tumble weeds as the joke goes down like a lead balloon.

Still Mazer does deserve some credit for the work that he has done with ‘I Give It A Year’. Not many people like to ‘break the mould’ when making a romantic comedy and to his credit Mazer doesn’t just break it he shatters it. And while this may be considered an anti-romantic comedy it certainly won’t leave those looking for a bit of a romance in their films out in the cold… it has romance it just goes about telling the story a little differently.

‘I Give It A Year’ sees Rose Byrne once again show that she has a flair for comedy, while Rafe Spall may have been a surprising pick as a leading man but to his credit he does a great job with the material that he is given to work with. Anna Faris also shows that when given a good script she can deliver although most of the comedy points here have to go to Stephan Merchant who steals many of the scenes that he is in.

This may not be the greatest comedy of all time, but it will provide some laughs and is a lot better than many of the other trashy comedies that have surfaced recently.