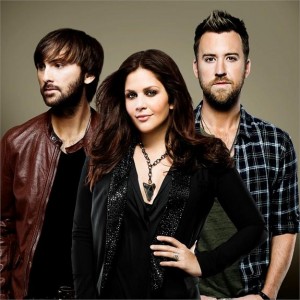 To ensure fans can get their hands on Lady Antebellum’s fourth studio album ‘Golden’ as soon as possible, the album will now hit Australian stores and online retailers next Monday May 6.

‘Golden’ follows the Gold selling ‘Own the Night’ and Platinum selling ‘Need You Now’ albums. In total, Lady Antebellum have sold in excess of 230,000 albums in Australia and last year played 3 sold out Sydney Opera House shows confirming their status here as one of the most popular country/pop groups of the moment.

The first single taken from ‘Golden’ is the Grammy winning trio’s seventh US Billboard Country Airplay #1 ‘Downtown’ which has also been their fastest selling US single to date in that country. Seen as a bit of a departure for the group, vocalist Hillary Scott was quite nervous about the song initially. “Most of what the world has seen from Hillary from a radio single standpoint is this very sweet kind of style like ‘American Honey,’” said Lady A’s Charles Kelley. “But, she’s got a lot of sass and a lot of grit to her voice, too, so it’s been really fun to bring that out of her.”

‘Golden’ also features ‘Goodbye Town’, co-written by ‘Need You Now’ collaborator Josh Kear. Charles explains, “There’s just something about this song that I think people can relate to. It’s like when you’ve been with someone a long time, you live in the same town and everything reminds you of that person.” “He sings the crap out of it” confirms Hillary of Charles’ impassioned vocal delivery of the track.

Since its 2006 inception, Lady A have sold 11 million albums worldwide. In the US, nine of the band’s singles are certified Gold, with four surpassing the Platinum mark. Their single “Need You Now” went on to sell over seven million globally, achieving double platinum status in Australia and claimed five of the trio’s seven career GRAMMY wins, including the all-genre “Record of the Year” and “Song of the Year.” .