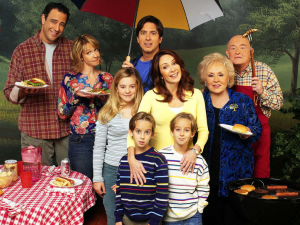 The National Association of Broadcasters announced today that the hit series “Everybody Loves Raymond” will be the 2014 television inductee into the NAB Broadcasting Hall of Fame. The show will be honored at the 2014 NAB Show Television Luncheon, April 7 in Las Vegas. Cast members expected to attend the induction include Ray Romano, Patricia Heaton, Doris Roberts, Brad Garrett and Monica Horan, along with the show’s creator, Phil Rosenthal.

“‘Everybody Loves Raymond’ is a great example of high quality broadcast programming that provides family entertainment, resonates with audiences of all ages, and above all, makes us laugh,” said NAB President and CEO Gordon Smith. “I look forward to meeting the cast members and writers and recognizing the show’s amazing success at this year’s NAB Show.”

The show, which debuted in 1996, aired for nine seasons, and ranked among the top 10 programs on television beginning with the 2000-2001 season. “Everybody Loves Raymond” completed its network run on the CBS Television Network in May 2005 with the series finale drawing more than 32 million viewers. A huge hit in prime time, the show has also been a ratings winner in syndication, consistently ranking in the top five of all syndicated programming.

“Everybody Loves Raymond” is a family comedy, combining real-life situations; strong, well-defined characters; distinctive performances by expert comic actors; and crisp, clever writing. Several of the show’s principal writers, many of whom are among Hollywood’s top comedic writers, will participate in the April 7 induction ceremony.

The series follows the relationships between three close-knit generations of the Barone family that happen to live too close for comfort. The main character is sportswriter Ray Barone (Ray Romano), who lives in Long Island, NY, with his wife, Debra (Patricia Heaton), and their three children. Living just across the street are Ray’s meddling parents, Marie (Doris Roberts) and Frank (Peter Boyle). And, constantly moving in and out of his parents’ house is Ray’s older brother, Robert (Brad Garrett).

The series was created by Phil Rosenthal and executive-produced by Rosenthal, Ray Romano, Stu Smiley and Rory Rosegarten. The series was produced by Worldwide Pants, Inc. and HBO Independent Productions. “Everybody Loves Raymond” is distributed domestically in syndication by CBS Television Distribution and internationally by CBS Studios International.