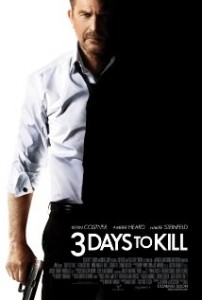 Summary: A dying Secret Service Agent trying to reconnect with his estranged daughter is offered an experimental drug that could save his life in exchange for one last assignment.

OUR 3 DAYS TO KILL REVIEWS & RATINGS:

Greg’s 3 Days To Kill review can be found at www.filmreviews.net.au

Not long ago it seemed that the Kevin Costner bubble had burst. The success of films like The Bodyguard and Dances With Wolves were completely forgotten about and he was literally box office poison. Actually he was worse than poison because most of his films never even made it to the cinema – instead they copped the dreaded straight-to-DVD tag. But the past few months have seen Costner return to the past box office success as he has had starring roles in Jack Ryan: Shadow Recruit and Man Of Steel, and now he’s back bigger and better than ever in 3 Days To Kill.

Here Costner plays Ethan Renner a CIA Agent who is good… damn good… at his job, so good in fact that nobody seems to be worried that Ethan is feeling ‘off-colour’ while being involved in a sting to bring down two of the world’s biggest terrorists – The Albino (Tomas Lemarquis) and The Wolf (Richard Sammel). However, things go horribly wrong when The Albino works out that something is up and Ethan collapses while going after him.

With both men gone Ethan’s bad news gets worse when he is diagnosed with a form of brain cancer that will kill him within 3-5 months. After he is stood down as an Agent Ethan decides to try and repair his relationship with his ex-wife Christine (Connie Nielsen) and the daughter he has never really known Zoey (Hailee Steinfeld).

Just as he is beginning to repair these two relationships Ethan receives another surprise when a mysterious (yet incredibly sexy) agent called Vivi (Amber Heard) shows up saying she has an experimental drug that will keep Ethan alive but she will only give it to him if he agrees to keep going after The Albino and The Wolf. As she so elegantly puts it ‘KILL OR DIE!!!’

One of the things that no doubt scares people about 3 Days To Kill is the fact that McG is at the helm. Let’s not forget that this was the man that once directed the Charlie’s Angels films and This Means War. However, on the plus side he was also the man behind the underrated Terminator Salvation and this time he is working with a script that was written by Luc Beeson… a man who certainly knows his way around an action film.

The film itself has a strange feel around it. At times it seems that McG can’t work out whether he wants the film to take an in-depth look at a father and daughter repairing a fractured relationship or whether he wants it to be a straight-out action thriller like the Taken franchise. While pondering this the audience soon becomes aware of the fact that the film’s mood simply mirrors the thoughts going through Ethan’s mind – does he want to be a family man or does he want to remain with the CIA? With that in mind the film works although McG should have had the sense to keep the little bits of humor right out of the film.

3 Days To Kill also sees Kevin Costner take back his mantle of a leading man. Here Costner mixes action with drama in the same way that Liam Neeson has in his recent films. It’s an obvious bid for Costner to try and boost his current on-the-rise-popularity and to be quite honest he does it here with ease. He has charisma, plays the downtrodden man well and any movie buff will see the obvious similarities to the character he played in The Bodyguard, especially when he is carrying Zoe out of the club after she has almost been date raped.

True any actor playing a ‘baddie’ in this film is seriously stereo-typed while Connie Nielson should rightfully feel like she has been ripped off by her character not being fully explored but on the flipside both Amber Heard and Hailee Steinfeld really get to show some skill. Steinfeld shows she is really maturing and while her performance here is nowhere near the effort she put in when doing True Grit she again reminds audiences that when she is called to deliver she does. Then there is Amber Heard who continues her recent sexpot role in Machete Kills with an alluring role that would normally go to the likes of Angelina Jolie. The ending of this film suggests that perhaps they are trying to create a franchise around Heard’s character of Vivi and that certainly wouldn’t be such a bad thing.

At the end of the day 3 Days To Kill is not a masterpiece but if you are looking for an action film that also calls upon a little emotion from its characters then you could do a lot worse.

Other Subculture Entertainment Reviews of ‘3 Days To Kill′: Nil.