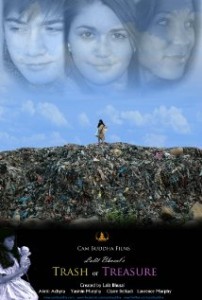 Summary: While an English family fight over an unwanted toy a young slum girl in a third world country decides to make her own out of discarded rubbish.

OUR TRASH OR TREASURE REVIEWS & RATINGS:

The term ‘first world problem’ is one that has been increasingly used on social media over the past twelve months. It is usually used to describe mundane problems that rich or middle classed people can have – things like turning up at your bakery and discovering that they are out of blueberry muffins. Now comes a film that perfectly sums up the term ‘first world problem,’ – a short film from filmmaker Lalit Bhusal named Trash Or Treasure.

The film tells two parallel stories. The first sees a middle class mother (Claire Belkadi) who is driving along a busy British road with her son (Laurence Murphy) and daughter (Yasmin Murphy) sitting in the back seat. The peace in the car though is soon broken though when the daughter is given a teddy bear as a gift, a gift that she neither wants or believes is good enough for her.

Then there is the second story which sees a young girl (Akriti Achyra) sifting through rubbish in a third world slum. As she finds a picture of a teddy bear her eyes light up and she starts on a mission to make herself a bear out of whatever rubbish she can find.

Bhusal’s script shows the vast difference between the first and third worlds in a way that very few films are able to portray on the screen. A lot of filmmakers have attempted the task over the years but many end up creating a film that looks a lot like a World Vision television advertisement. It may tug on the audience’s heartstrings but the fact that it virtually has not story makes it little more than a video montage. Bhusal’s script is exactly the opposite, the story comes through strongly and while the third world storyline only gently pulls at your emotions the first world family certainly brings out a sense of guilt… after all we’ve all been guilty of their crimes at some time.

Aside from the script Bhusal also shows a genuine talent as a director as well. He seems to know the perfect time to cut between the two stories, something that many filmmakers fail miserably at, while the shots that he uses to capture the slum and the young slum girl really reveal a truly gifted director that has a good future ahead of him. His shot selection speak a million words so there is little wonder that there is no dialogue needed for this part of the film.

Trash Or Treasure is a powerful film. It is well shot, beautifully written and is the kind of film that makes anyone who sees it sit down and reflect on their own lives. It is a must see for fans of short films and announces Lalit Bhusal as a promising filmmaker who is set to make some amazing films.

Other Subculture Media Reviews of ‘Trash Or Treasure′: Nil