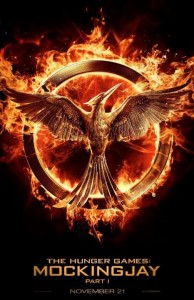 Subculture Media are pleased to announce that Roadshow Films have just shared the official DIGITAL FIRST LOOK at THE HUNGER GAMES: MOCKINGJAY – PART 1.

With this morning’s global debut of the first look at THE HUNGER GAMES: MOCKINGJAY – PART 1, audiences are given insider access to the most highly anticipated film of 2014.

Series #1 features an exclusive look at District 13’s President Coin, along with a video interview with Julianne Moore and a Q&A with director Francis Lawrence, producer Nina Jacobson, and screenwriter Peter Craig.

Additionally, get first look images and behind-the-scene stills, an interactive sneak peek at a page from the film’s script, and the official motion poster.

Head to TheHungerGamesExclusive.com for your all-access pass to the making of MOCKINGJAY. #Mockingjay

THE HUNGER GAMES: MOCKINGJAY – PART 1 will be released in Australian cinemas on November 20.