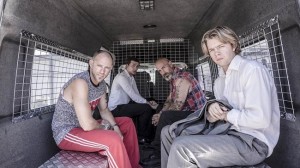 Pinnacle Films will release Mack Lindon’s debut feature film – RISE –  based upon his own real life story, in cinemas across Australia on November 6, 2014.

With exceptional performances by newcomer Nathan Wilson, Martin Sacks and Marty Rhone, RISE follows the story of a young nurse, Will McIntyre (Wilson), who loses his freedom after a one night stand leads to a charge of rape. Despite his innocence, he is found guilty at trial, and sentenced to six years imprisonment in a maximum security jail.

There, he meets two unlikely friends in Jimmy Cove (Sacks), a hardened inmate, infamous for a string of armed robberies and Fung Poi (Rhone) in for murder, who subsequently was bashed in prison, leaving him permanently wheelchair-bound. In Will is given the task of nursing Fung and as a bond develops between the three, each has a meaningful and positive impact on the other, each struggling with their fate and trying to make sense of it all.

Meanwhile, a Queen’s Counsel Barrister, Julie Nile (played by Erin Connor), is challenged to compromise her status and wage to prove Jimmy’s innocence.

RISE, and the making of it, is a classic human story of mankind’s ability to create positivity out of extreme adversity.  During his almost two year stint in prison that began in 2008, Gold Coast-based Mack Lindon commenced writing his screenplay and after he was released, created a “pitch trailer”, which took out the gong in the ‘Best Trailer’ category at the Hollyshorts Film Festival in LA, 2013 and was an invaluable tool for raising private funding to make a feature film.

The self-taught filmmaker rallied together a cast and crew of more than 300 people to tell his story through the fictitious character of a young nurse named Will McIntyre.
“In the beginning, apart from a handful of people, few people knew that the story wasn’t just written by me, it actually happened to me,” Mack explains.
Mack was 25 years old when that fateful night turned his life into a living nightmare. “The trial wasn’t just and I couldn’t prove it (the one night stand) was consensual.”

Holding strong to his truth, Mack began to write his story in his prison cell, eventually forming the idea to turn the experience into a film.  Having no idea where to start, acclaimed filmmaker Rob Sitch would be the one to help him on his path. “While in jail, I sent Rob Sitch a letter, explaining my innocence and that I wanted to turn my story into a film, but I didn’t know how. He actually replied, outlining what I should do. I was yet to prove my innocence, but I knew I wanted share my story through film once I was freed.”

After a retrial in 2011, Mack was able to clear his name and put his days in prison behind him and being encouraged by Rob’s advice, was driven to pursue filmmaking, creating a storyboard and outline he would use to pitch to investors and actors.

The writer, producer and director of ‘RISE’, Mack says the story isn’t about the accuser. “It’s about encouraging people to carry on against all odds. It’s about the injustice that a legal system can find you guilty, then years later, not guilty, yet not be compensated.
“I’ve turned something bad into a blessing, it has allowed me to define my character and I’ve been able to make a film which I hope people can be inspired by. Forgiveness is the key to moving forward.”

Mack currently resides in the Gold Coast, Queensland with his wife and two children.  In 2010, he and his wife formed Vision Films Australia, in order to produce RISE and are already in development with their second feature film.

Mack and the main cast of RISE will attend public premiere Q&A screenings in key east coast cities as follows: