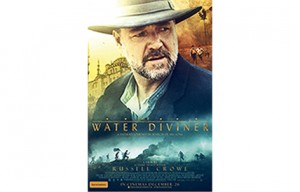 After only 6 days of release, Russell Crowe’s directorial debut THE WATER DIVINER became the highest grossing Australian film of 2014.

Opening on Boxing Day, the total box office for THE WATER DIVINER at the close of 2014 was $5.68 million, making it the most successful Australian film of 2014 following just 6 days of release and previews. It surpasses the 2014 gross of The Railway Man.

Australian audiences have warmly embraced THE WATER DIVINER, and it continues its successful cinema run, with its current box office as of January 4, 2015 standing at $8.4 million.

Mike Baard, Managing Director, Universal Pictures Australia and Sandie Don, Head of Distribution, Entertainment One, comment: “We are delighted that Australian audiences have responded with such enthusiasm to the film. It’s that time of year when people are thinking about the future, and THE WATER DIVINER reminds us of the possibility of hope. It is so fitting that in the year that we remember the 100th anniversary of Gallipoli, that all Australians have a film which transports audiences to that time and place, but does so with a fresh perspective and such a positive and uplifting message which is relevant today.”