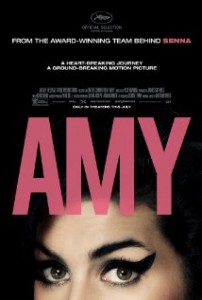 Summary: A look inside the personal life of star Amy Winehouse. The film follows her from being discovered through to the dizzying heights of winning a Grammy Award to her tragic demise.

Not being a fan of Amy Winehouse’s I wasn’t sure what to expect from the documentary Amy. The film had received rave reviews from right around but aside from knowing one of two of her big hits (namely Rehab) I actually didn’t know that much about her. Therefore the fact that this docco actually had me feeling somewhat emotional times really just goes to show how inside the life of his tragic star that director Asif Kapadia really goes… he doesn’t leave one single stone unturned.

Kapadia announced himself as a seriously gifted documentary maker when he released Senna in 2010. The docco went so far into Senna’s life that even those film critics and fans who despised and knew nothing about Formula One racing were listing the film as a film that you had to see. Kapadia does the same here with Winehouse. He doesn’t sugar coat anything and instead shows the tragic life of a girl who was given an amazing vocal talent but probably would have much better off and happier if she reached the level of stardom that she did.

One of the best things about Amy is just how watchable Kapadia has made the film. Yes it runs for 128 minutes (some would argue overly long for a documentary) but so gripping is the story being told that you never once start to feel bored and start to think what coffee you might order after the credits roll. Kapadia allows Amy to start off like any music documentary chronicling a young star’s life would. There are the customary shots of her mucking around with her friends, singing at clubs in front of small crowds, but Kapadia also allows the audience to see more than that as he clearly shows that even at the age of nine Winehouse was already deeply troubled and the rollercoaster was just starting to take off.

Like he did with Senna Kapadia breaks with normal traditional documentary filmmaking. There are virtually no talking head interviews here, instead the audience are treated to a lot of private home movies of Winehouse, her family and her friends that tell more about the star and her lifestyle than what any interview could ever do. Also making this a gripping watch is the fact that Kapadia doesn’t hold back when he is trying to tell his story. He doesn’t allow everybody in Amy Winehouse’s life come out of this smelling like roses. The audience watches as Winehouse’s life of destruction comes a lot worse with the arrival of her boyfriend (and then later husband) Blake Fielder-Civil on the scene – the film then basically points the finger as an expert eerily reveals that it was in Fielder-Civil’s best interest for his gravy train not to get sober again. Likewise Kapadia has the bravery to lump blame on Winehouse’s own father and he first reveals that Amy’s bulimia etc started when her father left the family home when she was just a child, how he was the main reason that she didn’t go into rehab when her managerial team was begging her to and how he brought film crews around and planned tours when all she wanted to do was rest and get herself well. It is a very brave documentary maker who is willing to tell a story with such brutal honesty.

Kapadia’s alternative style of filmmaking also allows for him to let the documentary move along as he showcases the events in Amy’s life that was making her write the music she was writing. As handwritten lyrics appear across the screen the audience watches the life events unfold that sparked her to write the usually dark lyrics in the first place. Just as that similar kind of thing made Teen Spirit a must read if you are a fan of Kurt Cobain, this style here makes Amy a must see for Winehouse fans. I know having seen the film set out in this way I will never listen to the track Rehab in the same way again.

There are times when you are watching Amy and it feels like you are watching car crash in slow motion. Instead of becoming a character study of one of the most successful young musicians of our generation the docco almost becomes a cautionary tale of what drugs, bulimia and super stardom can do to an ordinary person’s life. Kapadia’s brilliant style of story-making makes this the can kind of film that not only educates but washes over you with every emotion imaginable. One of the best music documentaries you will ever see.

You can read Greg’s full Amy review on www.filmreviews.net.au