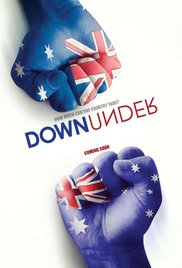 Down Under is a black comedy set in the aftermath of the Cronulla Riots, and it looks at some themes that are quite topical given recent events in Australia. This is writer/director Abe Forsythe’s first feature film since 2003’s Ned. Greg spoke to Abe to find out more about the film.
Down Under screens as MIFF’s Centrepiece Gala on Saturday August 6 at the Comedy Theatre.

You can listen to or download our Abe Forsythe interview right here.