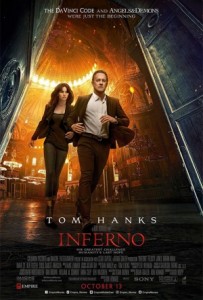 Summary: When Robert Langdon wakes up in an Italian hospital with amnesia, he teams up with Dr. Sienna Brooks, and together they must race across Europe against the clock to foil a deadly global plot.

Based on the novel by Dan Brown Inferno begins with Robert Langdon (Tom Hanks – Forrest Gump) waking up in a hospital with no memory of how he got there and being hunted by a assassin (Ana Ularu – Serena). After managing to escape with Dr. Sienna Brooks (Felicity Jones – The Amazing Spider-Man) Langdon starts putting together the pieces and realises that he must try and stop an apocalyptic event set by Bertrand Zorbist (Ben Foster – Warcraft: The Beginning) who believes his actions will actually save the world.

But as Langdon tries to overcome memory loss and put the pieces together to solve the mystery things are made even more difficult by him when he realises he doesn’t know which World Health Organisation agent he can trust, Dr. Elizabeth Sinskey (Sidse Babett Knudsen – Westworld) or Christoph Bruder (Omar Sy – Jurassic World). To add to their confusion the audience also learns there is a puppet-master in the wings in the form of Harry Sims (Irrfan Khan – Life Of Pi).

While watching Inferno you do start to realise that this is going to be a film that divides its audience. For the regular popcorn set this is going to be a film that delivers a fairly decent, if not at times confusing, crime thriller plot that shows you just as many European landmarks as a Bond film. For the more seasoned film goer though this is a film that reveals some of the laziest filmmaking Ron Howard will deliver during his career with a clichéd plot that just follows the same sequence over and over – Langdon arrives in a city, goes to find the puzzle piece, is chased by Police and uses an ancient tunnel to escape and then moves on to the next city. There is also a level of inconsistence around the character of Robert Langdon that surfaces right throughout this film and despite the work of screenwriter, David Koepp (Jurassic Park), to pass it off as part of Langdon’s amnesia it simply doesn’t work.

Rather than being a gritty thriller Inferno becomes more of a fun ride as the audience gets to see European city of European city while there is a mid-level of suspense and you try in your mind to put the pieces together at the same time as Langdon does… although that it made a hell of a lot easier if you are up to date on your Dante. The big tip for the audience is to not let to get too bogged down in the ‘historical’ parts of this film or you will be scratching your head and hurling popcorn as you struggle to work out what the hell is going on.

Likewise this is a movie that Tom Hanks just seems to breeze through. While Sully recent saw Hanks once again reveal his wonderful character acting skills here Hanks wears the character of Robert Langdon like an old slipper, it’s a role that he is obviously comfortable in but doesn’t deliver the acting heights that we know he is capable of. The same can be said for Felicity Jones who isn’t given a huge amount to work with and even disappears for a quarter of the film. The big winner in the acting stakes is Sidse Babett Knudsen who makes good use of the screen time she is given. Omar Sy and Irrfan Khan are also wasted in their roles, the latter being given a role very similar to a poor man’s Bond villain as he plays a character that leaves the audience asking… is that even a profession?

The best way to enjoy Inferno is to just go into the cinema expecting a fun film. While it isn’t exactly a borefest it certainly lacks the suspense of Angels & Demons and is a lot more clichéd than the Da Vinci Code. Did the Robert Langdon franchise need Inferno? Probably not!

Other Subculture Entertainment Inferno Reviews: You can also listen to our Inferno reviews on The Good The Bad The Ugly Film Show Ep #196. Dave Griffiths also delivered his Inferno review on the 12/10/2016 episode of Living Fresh with IGA with Ed Phillips on 2UE.