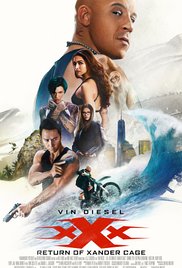 Vin Diesel fans haven’t exactly had a lot to complain about over the past few years. Thanks to the on-going Fast & Furious franchise they have been able to see their idol on big screens almost annually. Then of course is the fact that over the next few years they will see him in 3 more Fast & Furious movies and voicing the lovable tree Groot in both Guardians Of Galaxy 2 and Avengers: Infinity Wars. But they have always seemed to have one gripe – and that is they wanted to see the 49-year-old action hero get another chance to play Xander Cage.

With stories always changing on why Diesel never did the follow-up to XXX he wears a broad grin when he explains why he now fourteen years later he has decided once again to re-visit the character. “I just think that there is a need to re-visit this type of hero archetype,” he says. “He is in some ways the reluctant hero and in some ways the anti-hero but his individuality just shines. I walk away from this experience thinking that is who I could be. I could be Xander, he could be me. I think there is something timely about that and something cool about that. I feel that when we first made this movie people were calling it the Bond killer because it had beaten that year’s Bond and nobody expected that. I think that we have seen very many variations of spy movies and secret agent movies but I think there has been a desire to return to this. He is definitely a unique and very different type of secret agent. And I’m so happy to come back to Xander. I always felt that I owed it, I always felt that I was in debt and that sooner rather than later I would have to return to this character and right the wrongs of the past. I am so, so happy and so blessed that I have ahd the opportunity to do it, it’s not something that happens every day and by doing all the other work in my life I was able to pull this one off. I feel very, very excited and very, very proud of this film and of this franchise”

So that leads to a big question – what is Xander Cage like almost fifteen years on. “He is definitely still consistent and he has definitely had more experiences,” says Diesel after thinking for a moment. “You know he is different in the respect that he did try to comply with working with the Government and didn’t cry when it didn’t work out for him. I think what you will see this time though is his willingness to bring on a team and the fact that he values the team that he has and that it makes it incrediably different from the first outing because then he was just a solo lone-wolf, and I think in this movie we see that he has learnt to rely on people. I guess that makes for a better Xander in some way.”

Aside from the fact that Vin Diesel back most of the press surrounding XXX: Return Of Xander Cage has been about the quality of the actors and actresses that help make up Xander’s team – Ruby Rose, Nina Dobrev, Toni Collette and Kris Wu just to name a few. “It is very much assemble-all-parts this time,” laughs Diesel. “One of the fun and entertaining things about this film is that this team of misfits come together and work together as a team. It’s the love of the lifestyle that brings them all the table. They wouldn’t necessarily worry about being heroic, but they are heroic because of the circumstances, and what is interesting about that is the room to grow that their characters might have over the franchise. And that is something to think about not just what happens in this chapter but what happens in subsequent chapters. There are two teams formed during the movie, but the first team is there because of all the good times they have had with Xander because Xander is such a fun person to be with, they are there for the mission but also just to have a great time. As the team grows we see another component… a component that makes the mission more serious.”

Of course having such diverse characters means that the cast come from all corners of the globe and Diesel played a very big part in that. “Incorporating this multicultural tone to the Fast & Furious franchise has worked with great succsess and I wanted to push it even further on XXX, to the point where I wanted to go to not only go to all the multi-cultural actors who live in California but I wanted to go into entirely separate film markets, entirely different regions and celebrate their heroes and their actors. Not only is Deepika (Padukone) an example of that but Donnie Yen is another amazing example of that… we actually went into China. Then there is Kris Wu who speaks to that, Ruby Rose speaks to that, Rory McCann speaks to that, Tony Jass speaks to that, even Nina Dobrev is from Canada. We really did travel right around the world and that was very, very exciting. I knew that we were onto something when we looked to the world to cast this movie.”

Now of course fans of the franchise will know that there has been a reference in the past to Xander being dead, so how do they bring him back for this time around. “This is essentially a story about a man being called back into action,” says Diesel thinking carefully. “The NSA is up against a group that we learn more about throughout the picture, but it is a group that they can’t take down, that they can’t handle. They have this old and archaic way of dealing with things and this new team, this interesting teams is so much of a threat that they have to now go back and get this wildcard called Xander to go up against them. And how the two teams work against each other and then ultimately work WITH one another is where the stories lie.”