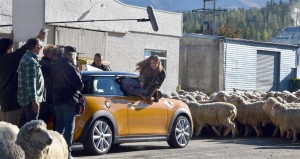 Director Matt Murphy took on an ambitious project when he decided to make the film Pork Pie. Not only is he remaking one of New Zealand’s cult classic films but his father was the director of the original film. Dave Griffiths sits down and chats to Matt to find out how hard it was to remake the film with the family connection and also how difficult it was to film such an action packed film.

You can listen to or download our Matt Murphy interview right here.