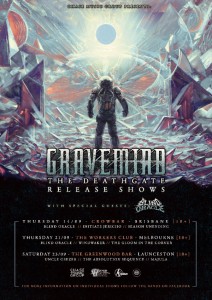 Early July saw Melbourne Deathcore outfit Gravemind unveil that they were behind mystery website thedeathgate.com. The site countdown eventually revealed that their EP ‘The Deathgate’ will be released on Friday August 11 (Pre-Orders here).

Today, they are rolling out second single from the EP, Echo, which continues the story of the astronaut who journeyed through The Deathgate. The track also features band-of-the-minute Alpha Wolf‘s Aidan Ellaz on guest vocals.

They also are revealing their EP release tour, which sees them heading out on a three date jaunt in Brisbane, Melbourne and Launceston that brings along fellow Deathcore crew Blind Oraclefor the Brisbane and Melbourne shows.

First single from The Deathgate, Anaesthesia, has been received well by the heavy music world, with it being played upwards of 20000 times on Spotify and Youtube alike – and being added to both the US Spotify playlist Deathcore and Australian spotify playlist Homegrown and Heavy.

Punters can look forward to seeing Gravemind on tour, having developed their sound and bone-rattling live show in shows with bands such as Architects, House Vs Hurricane, I Killed the Prom Queen, King Parrot, Hollow World, Iconoclast, A Night in Texas and Justice for the Damned.

Gravemind’s EP ‘The Deathgate’ will be released on Friday August 11 – pre-orders open now. Singles ‘Anaesthesia’ and ‘Echo’ are available now in iTunes and Spotify and all online retailers.