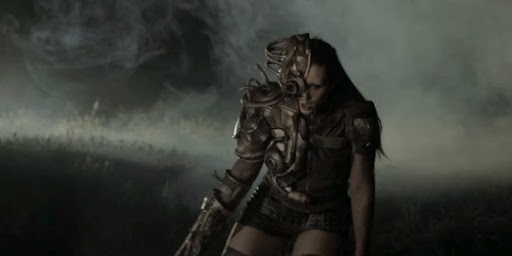 One of the great initiates that has started up during our pandemic lockdown is that Monster Pictures have re-started their Friday Night Frights but are doing it online. The film screening tonight is the deserved Australian cult classic SheBorg Massacre. We decided that was the perfect excuse to catch up with filmmaker Daniel Armstrong who since directing SheBorg Massacre has also released Tarnation and is currently in post-production for his latest film Nova Star.

“Hopefully it will help kick a few of the lockdown blues in the nuts,” says Armstrong laughing when we begin to talk about SheBorg Massacre being part of Friday Night Frights. “I only found out about a few days ago, but it should be pretty fun… it should be pretty cool. I checked out Cat Sick Blues when it was on the other week, it is a good thing to do when you are a stuck at home, let the internet entertain you.”

As our discussion goes on we start to think back to the early days of when SheBorg Massacre was still in its infancy. “That is going back to far,” he says laughing again. “I think we shot in 2015 so I probably would have written it back in early 2014. What I remember is coming up with a title – originally it was called SheBorg Prison Massacre. I thought ‘that is the best name for a film, I should write that.’ So I remember writing that and then we couldn’t find a prison or something that looked like a prison to shoot in, but we did know a guy that had a farm that looked like a puppy farm. They were actually old chicken coops but we thought it looked like a really dodgy puppy farm.”

“So then I changed the name to Sheborg Puppy Farm Massacre and then we dropped the Puppy Farm part because it offended too many people,” he says continuing. “Then it became SheBorg Massacre. But yeah it started with a title.”

Despite the film being made on a micro-budget the film does actually contain actual stunts. At one point a car is crashed into a tree and at another point actress Whitney Duff is left climbing on the side of a moving van. That led me to ask how Armstrong shot stunts like that while filming on such a low budget. “To drive into the tree we just had an insane person who was willing to drive a car into a tree,” he explains. “So we just did that for real, we actually drove the car into the tree. With the van stunt we actually got a stunt co-ordinator and we got him in for the day and Whitney is actually wired onto that car. She was talked to about how the best way to do it but otherwise the car is actually driving around with her hanging off the side and back of it. She has a harness connected to the back of the car somewhere so in theory she can’t fall off, and she didn’t fall off so I guess it all went well.”

One of the highlights of the film are the amazing performances of Whitney Duff and Daisy Masterman so I just had to ask Armstrong how he went about discovering both of them. “It is the chemistry between Whitney and Daisy that makes the film fun to watch,” admits Armstrong. “They become legitimately good friends during pre-production and that really shows. That energy really helps you enjoy the film.”

“Whitney just auditioned,” he says continuing. “I don’t know where she would have seen the casting call but she just auditioned and I wrote the part for Daisy. I had worked with Daisy on Murderdrome, she had a very, very small part in that but she was extremely funny and I thought we should put her in a bigger part. I always knew that she was going to be Eddie so Daisy came to all the auditions that people came to for the Dylan character which is the character that Whitney plays. Then we kind of just judged on which applicant had the best chemistry with Daisy on the spot.”