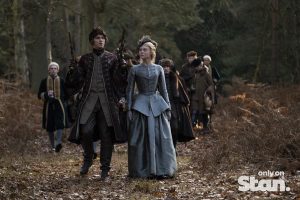 The Great — “The Great” – Episode 101 – In 1761, Catherine travels to Russia and becomes the Empress by marrying the Emperor of Russia, Peter. With hopes of marrying a great love, Catherine soon realizes Peter is a selfish brat who stands against everything she values. Catherine is feeling hopeless and verging on suicide when her servant, Marial, presents her with an alternative path ñ to overthrow Peter. Peter (Nicholas Hoult) and Catherine (Elle Fanning), shown. (Photo by: Nick Wall/Hulu)