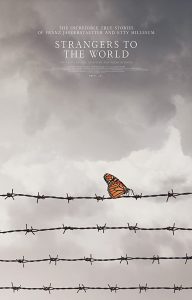 Summary: A short documentary that looks at the lives of Etty Hillesum and Franz Jaegerstaetter.

OUR STRANGERS TO THE WORLD REVIEWS & RATINGS:

I’ll be the first to admit that I am a history buff. I’m the person who while in a car will yell out for it to stop so I can go and look at a historical marker that I have spotted on the side of the road. I can’t explain it I have just always been that way. Even as a child I would throw my Golden Books out of the way in order to get to my Ned Kelly colouring book.

It is perhaps for that reason that I warmed to new Australian documentary Strangers To The World the way I did. Featuring prominent Australian actors Rachel Griffiths (Muriel’s Wedding) and Oscar Redding (Van Dieman’s Land) the documentary looks at the lives of Franz Jaegerstatter and Etty Hillesum – two people that stood up to the Nazi regime during World War II and refused to allow their morals to be changed.

With Strangers To The World I found the subject matter enthralling. Being a fan of Terence Malick’s 2019 film A Hidden Life Catholic-resister Franz Jaegerstatter has been someone I have been yearning to learn more about for awhile now. Watching Strangers To The World did fill in some of the blanks for me. I was able to learn about the fact that Jaegerstatter lived a rebellious life and only turned to religion during the rise of facism in Europe – but there was something that was unsettling for me throughout the documentary; the very Australian accents during the dramatisations.

Scenes such as Jaegerstatter confronting his Bishop (Neil Pigot – Blue Heelers) about where the Catholic Church should stand on the rise of Nazism was a fascinating watch and was well delivered by two talented actors, but at the same time I just couldn’t ‘not’ here the Australian accents which at times seem to distract from the power of the scenes.

It was also the same with the dramatisations during the story of Etty Hillesum. Having never heard her story before I sat glued to the screen wanting to learn more. Again the theatrical-style dramatisations – this time delivered as great monologues from the talented Rachel Griffiths reading from Hillsum’s letters – looked great but could have been so much more natural had Griffiths been asked to adopt a Dutch accent.

If the sole aim of Strangers To The World is to educate and inspire then it certainly hits it mark. Having watched the documentary I now feel like I know a lot more about Jaegerstatter and received a great insight to how he was feeling in the last days of his life. Likewise I now know about the amazing spirit and determination of Etty Hillesum who remained smiling even while she was in a concentration camp. So powerful was the delivery of her story here that I am trying to find a way to read her letters and diaries.

However if the aim of Strangers To The World was to entertain then I am not sure that it worked. As a documentary it felt to me like the kind of film that would be shown to a High School history class or screened at a museum rather then something that would have people lining up at a cinema to watch. To be succinct it feels like it was more designed to be a Sunday afternoon docco on the ABC then it is to be a big cinema experience.

Strangers To The World is an inspirational film but it is also the kind of documentary that makes you want to learn more about the subjects at the hand. It is well worth a look if you a serious history buff but may be a little dry for those looking to be entertained at the same time.

Other Subculture Entertainment Strangers To The World Reviews: