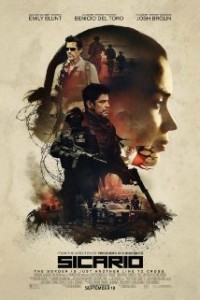 With Jennings’ blessing Kate finds herself recruited to join a black-op mission led by special Agent Matt graver (Josh Brolin) and a Columbian operative known only as Alejandro (Benicio Del Toro). The mission soon sees Kate very much in the middle of the borderland drug war in a word where there seems to be no rules whether you are on the side of good or evil.

No I’m not chucking in my card to the Comic Book And Cult Film Lovers Association but one of the films I was most looking forward to this year was Sicario. Yes I am not too embarrassed to admit that the fact that a certain director is at the helm of a movie is sometimes enough to make me wanna see a film and that was certainly the case here. See to me Denis Villeneuve’s last film was a cinematic masterpiece. I can watch Prisoners over and over again and find something new that I like about each time, add that to the fact that Villeneuve was directing a borderland crime film starring Josh Brolin and yes Sicario had me at hello. My biggest fear for Sicario was that Hollywood would have claimed Villeneuve and that he would decide to rope in his grittiness and harshness, luckily that certainly isn’t the case here.

Many have labeled Sicario a blockbuster for this year, yet that title just doesn’t seem to fit comfortably with this film. This film is harsh, bloody harsh and it’s not hard to see that the popcorn set are going to struggle with the film’s brutal opening in with Kate finds a house that contains more dead bodies than your local morgue. And in typical Villeneuve fashion he doesn’t make it easy watch for its audience, no as he goes in for the close-up on a decaying man’s face you are well and truly aware of the fact that while he is making a Hollywood film he certainly hasn’t been claimed by Hollywood.

Visually Sicario is a blessing. Villeneuve along with DOP Roger Deakins have made this movie look like some kind of modern day western with it’s yellow tinge and cinematic aerial desert shots, and somehow that works wonders with Brolin and Del Toro cruising around like modern day Sherrifs seeking vengeance. Sadly though Sicario’s screenplay isn’t always as good as the visuals the audience are being treated to. Unlike Prisoners this film has some weak points that leave the audience shaking their head, nothing major but little moments like Kate picking up the Police Officer in the bar… isn’t it just too much coincidence that her partner would just happen to be good friends with the guy?

Still there are powerful moments in Sicario, moments that are so powerful that they will stick in your mind for ages. From the fact that this is a very much anti-Mexican tourism video as Villeneuve takes you past bodies hanging from Mexican border-town overpasses to suspenseful scenes such as the border battle which will have any cinema lover watching with baited breath. Then there is the magnificent finale with Del Toro and a dining table… I’m not going to say anything else but that as I don’t want to spoil the film… but hell it is one of the most suspenseful scenes you are going to see in cinema for a long, long time. Adding to the suspense all throughout this film is the pounding soundtrack that simply becomes a character upon itself.

Now you may have heard some people criticize Emily Blunt’s acting performance in Sicario. Don’t believe it. She puts in a great effort and those complaining about her performance are simply looking for something that doesn’t need to be there. Kate is not Lara Croft in a Police uniform. She’s a very innocent but good at her job cop normally used to dealing with hostage situations who suddenly finds herself thrown into a world she just doesn’t understand. Anyone that goes into this film expecting Blunt to be the gun-ho character she was in Edge Of Tomorrow is going to be disappointed, it’s just not what Kate is.

Then there is Brolin and Del Toro who knock their performances out of the park. Brolin is gruff and rough as you expect him to be and is well backed up by Del Toro who has an air of mystery about him from the moment he first appears on the screen here. Some of the Del Toro’s performances have been a little questionable recently (no I still have not recovered from that scene with him, Diaz and a windshield in The Counselor) but here he bounces back with a brutal performance and for once he doesn’t over act his way through it. He’s just on song.

If you’re a fan of Denis Villeneuve’s past films you are certainly not going to be disappointed by Sicario. It is brutal, rough and in-your-face, just the way a crime thriller should be. Brolin and Del Toro bring their A-Games and this is one film that is a must see for 2015.

You can read Greg’s full Sicario review on www.filmreviews.net.au