Altruman Picks Up US Award 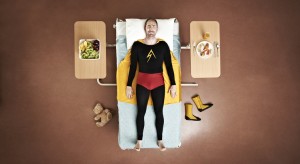 In what’s been an exciting year for original Australian web content, Boomgate Films is proud to  announce that its web series Altruman has been invited to a string of web festivals and begun scoring international awards.

Last Wednesday night Ben McEwing, who plays the title character, picked up the award for Best Lead Actor in a Comedy at the Indie Series Awards in Los Angeles. The show was also nominated for Best Directing in a Comedy and Best Soundtrack. The Indie Series Awards celebrate ‘independently produced, scripted entertainment created for the web’ and ‘emphasise artistic merit and social impact’ over view-count and commercial impact.

“[The award] is a reflection on the whole team. You can only do your best work with a talented group of collaborators and Altruman is that. Such amazing people,” says McEwing, who admits that “It’s still sinking in.”. It comes at the end of a dream run for the actor, who also played the lead in Tropfest 2014 finalist Sine.

The six-part series premiered on ABC iview in September 2014 and follows the journey of a selfless superhero who begins to question his life choices after being diagnosed with cancer.

Co-creator Robin Geradts-Gill says, “It’s great that this space has opened up for recognising narrative web content. Only a few years ago it felt like there weren’t festivals for stuff that wasn’t a short or feature film. Now, for those of us wanting to tell serialised short stories, there’s a chance to be recognised, and to mix with like-minded film-makers.”

Co-creator Hannah Moon says, “What’s been interesting is how the show has been classified by different festivals. We sort of saw it as a drama with comic elements, but some festivals have chosen to reclassify it as a comedy, and some even have a separate ‘dramedy’ category. I’m glad people are reading it and engaging with it in different ways.”

Co-creator Stephen Sholl adds, “It’s been really exciting to see it with Spanish, or Mandarin subtitles. The web has opened up so many new avenues and platforms for story-tellers.”

Boomgate Films produced Altruman following a successful 2012 Pozible fundraising campaign which saw donors sent their very own pair of Altruman underpants as a thank you gift. Hannah, Steve and Robin, who founded Boomgate Films together, are currently spread across China and the UK juggling several projects, including the short film Dario, which is due to have its international premiere at the Palm Springs International Film Festival later this year, as well as a feature film, still in development, called Starfish.

The last twelve months has seen several Australian web series enter the global spotlight after reaching huge audiences on YouTube, including How To Talk Australians and The Katering Show, which, like Altruman, were made with support from Screen Australia’s Multiplatform funding program.

Based on a short film, Altruman reunites the team behind the original and adds some exciting new cast members, including comedian Lawrence Leung and Australian drama stalwarts Deidre Rubenstein & Tony Nikolakopoulos, as well as award winning cinematographer Ryan Alexander Lloyd.

It features a soundtrack packed with emerging and established Australian talent including The Little Stevies, The Panics, Ainslie Wills and Jack Carty.