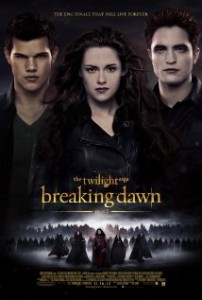 Summary: In the highly anticipated final chapter of the blockbuster series The Twilight Saga, the newfound married bliss of Bella Swan and the vampire Edward Cullen is cut short when a series of betrayals and misfortunes threatens to destroy their world. Edward has finally fulfilled Bella’s wish to become immortal. But the arrival of their remarkable daughter, Renesmee, sets in motion a perilous chain of events that puts the Cullens and their allies against the Volturi, the fearsome council of vampire leaders, setting the stage for an all-out battle.

Whoever made the decision to split The Twilight Saga: Breaking Dawn Part 2 into two films has a lot of answering to do. Director Bill Condon (The Twilight Saga: Breaking Dawn Part 1, Tilda) saves himself with a brilliant looking battle scene, but the damage is done, the fact that the last novel in the series had to be stretched out to four hours of screen time means there is just too much filler to make the films as good as they could have been.

Part 2 in the Twilight conclusion sees Bella Cullen (Kristen Stewart – Snow White & The Huntsman, On The Road) learning about her newly acquired vampiric skills and tendencies as she finally rises as the vampire she has wanted to be for quite a long time. However her notions that life will now be easy as she is married to Edward (Robert Pattinson – Cosmopolis, Bel Ami) are quickly broken when she learns that her fast-growing daughter Renesmee (Mackenzie Foy – TV’S Hawaii Five-O & R.L. Stine’s The Haunting Hour) who has been in-printed to the ever-present werewolf Jacob (Taylor Lautner – The Twilight Saga: Breaking Dawn Part 1, Abduction).

Further dramas arise when the Cullen’s jealous cousin Irina (Maggie Grace – Taken 2, TV’S Californication) mistakes Renesmee for an immortal child. She then tells The Volturi that the Cullen’s have broken on of the vampiric cardinal sins and turned a child. The result is the Volturi led by vindictive Aro (Michael Sheen – Jesus Henry Christ, The Gospel Of Us) and his prized colleague Jane (Dakota Fanning – The Motel Life, Now Is Good) coming for the Cullens with death as the penalty. Not to be disturbed Carlisle Cullen (Peter Facinelli – Loosies, TV’S Nurse Jackie) and the other Cullens search the world for vampires that believe their story and will help defend them against the Volturi.

The saving grace for The Twilight Saga: Breaking Dawn Part 1 is the fact that Condon has filmed an amazing battle sequence and that together with screenwriter, Melissa Rosenberg (Breaking Dawn Part 1, Eclipse) has created a brilliant twist/reveal that will have anyone that hasn’t read the novels on the edge of their seats. As far as film reveals go it is right up there amongst the best.

But sadly Breaking Dawn Part 2 is dragged down by the fact that in a bid to stretch the film out both Condon and Rosenberg have had to spend way too much concentrating on things that could have been done in montages – mediocre things like Renesmee meeting all of the Cullen’s allies and Bella learning all of her vampiric skills and tendencies. There is also a small problem with the ending as their seems to be no closure for Bella with her father, Charlie (Billy Burke – TV’S Revolution & The Closer) or with any of her friends (who actually don’t appear in this film).

When it comes to the cast both Kristen Stewart and Robert Pattinson are both below par, a surprise considering both of shown in films outside of the Twilight franchise that they do have some acting ability. Taylor Lautner actually takes a huge step forward (perhaps he’s trying to make up for Abduction), but the standout is Michael Sheen who shines as Aro.

Breaking Dawn Part 2 is an okay closure for this film series but it’s sad realising that it could have been better if they had combined Part 1 and Part 2and just scrapped some of the filler.