Summary:  After 11 years, the Jackass crew is back for their final crusade.

Kyle’s rating Out Of 5 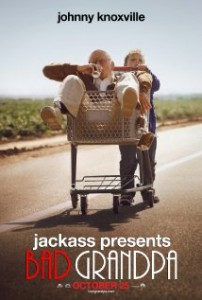 Summary: 86-year-old Irving Zisman is on a journey across America with the most unlikely companion: his 8 year-old grandson, Billy.

Please check Nick’s review of ‘Jackass Presents: Bad Grandpa’ that is available on The Good The Bad The Ugly Film Show Ep #58

Please check Adam’s review of ‘Jackass Presents: Bad Grandpa’ that is available on The Good The Bad The Ugly Film Show Ep #58

Okay, so not everybody over the years is going to have enjoyed what the Jackass guys have delivered to cinema screens. That’s okay, everybody has their own likes and dislikes. Still, when you are approaching a film to review it, you have to take into consideration whether the film does what it sets out to do. With that in mind, it does make reviewing a film such as “Jackass Presents: Bad Grandpa” a little easier.

While this certainly isn’t a film for the faint-hearted it does see the crew behind Jackass try something a little different to what they have done before. This time they mix up their stunts/hijinx with a narrative. It’s flimsy, but basically the film tells the story of 85 year old pensioner Irving Zisman (Johnny Knoxville – “The Last Stand,” “Movie 43”), who has just heard the news that his wife Ellie (Catherine Keener – “Captain Phillips,” “Can A Song Save Your Life”) has passed away.

Rather than allow the news to upset Irving decides that with her out of the way he can now live his life, however that thought is quickly extinguished when he also learns that his daughter Kimmie (Georgina Cates – “The Upshot,” TV’s “The Closer”) is going to jail for drug offenses and that he is going to have his drive his 8-year-old grandson Billy (Jackson Nicoll – “Fun Size,” “The Stand Up”) across country to his deadbeat father, Chuck (Greg Harris – “Wrong,” TV’s “The Cynical Life Of Harper Hall”).

The story is not strong and the screenplay is not great, yet “Jackass Presents: Bad Grandpa” does more than its fair share to entertain. The story does draw in the audience and you feel close to the characters, but of course this movie is all about the practical jokes and the humour and it is here that it delivers the pay load.

As you would have seen from previous Jackass films, Johnny Knoxville will do anything for a laugh, and nothing changes here. From placing his wedding tackle in a vending machine through to severely embarrassing himself in a strip-club, nothing is taboo. To Knoxville’s credit every prank featured in the film works and even the most hardened critic who may believe themselves above this kind of humor may find themselves crying with laughter in the cinema. Knoxville knows how to make an audience and isn’t that exactly what someone wants from a comedy film?

Of course though, Johnny Knoxville couldn’t just get through this film by getting hurt and putting himself in embarrassing situations. With a script in it he has to also find the ability to act. Luckily though that is something that Knoxville is more than capable of; people forget that over his career he has appeared in films such as “The Dukes Of Hazzard” and “The Ringer” and while he certainly hasn’t had the Academy wanting to give him an award, he has shown that he can be a pretty good comedic actor. Once again, Knoxville more than handles the acting that is required of him in “Jackass Presents: Bad Grandpa.” Along with a great latex job, Knoxville morphs into Irving eerily well and it’s easy to see how so many people where conned by him as he travelled across America.

Johnny Knoxville’s partner in crime this time around is young Jackson Nicoll who sadly had to endure working on “Fun Size” previously. He was one of the highlights in that film and here in “Jackass Presents: Bad Grandpa,” he certainly shows himself to be a young comedic actor who may well have a good future ahead of him. Nicoll matches the skills of Knoxville in many scenes and when he is called upon to ad lib he also does sensationally well. He is one comedic actor who certainly needs to have an eye kept on him.

If you’re looking for high art then “Jackass Presents: Bad Grandpa” certainly ain’t there, but if you want a film that will simply make you laugh, then you’d be an idiot to miss it.