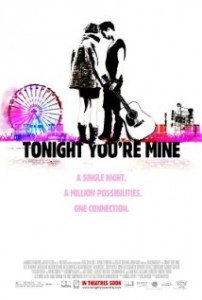 Summary:You Instead is a free-wheeling rock n roll love story set against the raucous magnificence and unforgettable sounds of Scotlands leading music Festival. Global Indie star Adam, arrives at T in the Park for his gig, during an impromptu backstage fight, Adam finds himself accidentally handcuffed to punk girl-band leader Morello the two are inseparably joined together for the next 24 hours.

Dave Griffiths’s ‘You Instead’ Review:

You Instead joins the ever-growing list of films released in 2012 that are guaranteed to frustrate anyone that is watching them. See as a film You Instead has more ups and downs than a rollercoaster. While this is the first film to truly capture the atmosphere of a music festival some elements of its screenplay are so bad it seriously holds back the film from becoming a great film.

The story involved in You Instead is incredibly simple. Morello (Natalie Tena – Bel Ami, TV’S Game Of Thrones) and Adam (Luke Treadaway – Cheerful Weather For The Wedding, Attack The Block) are musicians who have both been asked to perform at Scotlands ‘T In The Park’ Music Festival, but they are at opposite ends of the music sphere.

Adam is in a successful pop group with good friend Tyko (Mathew Baynton – TV’S BBC Proms & Spy) while Morello is in a struggling all female rock group. Fate brings them together when after a small scuffle a mysterious man named The Prophet (Joseph Mydell – Julius Caesar, TV’S National Theatre Live) handcuffs them together.

Unable to find anything to free them Morello and Adam realise they may have to go on stage for each other’s sets while the situation also casuses problems for them with their partners, Mark (Alastair Mackenzie – TV’S Lip Service & Skins) and Lake (Ruta Gedmintas – TV’S Lip Service, The Borgias).

Honestly, director David Mackenzie (Perfect Sense, Spread) does a wonderful job for You Instead. As he showed with films like Hallam Foe he’s not afraid to be a little edgy and that once again shows here. With You Instead he also shows that he has a brilliant cinematic eye and some of the shots he captures here are amazing and certainly capture the vibe of a music festival… something not many filmmakers have been able to do in the past.

But Mackenzie is let down by the fact that Thomas Leveritt’s (Girder) is dangerously shallow in parts while the scenes that involve the actors adlibbing with the various VIPs at the festival are even weaker. The end result is a bad taste in the mouth of the audience.

On a positive note though the acting of the film’s leads is exceptional. Natalie Tena showed in the Harry Potter series of films that she was an emerging talent and here she shows that she has really taken the next step while Adam Treadaway clearly shows that he is an actor that has a rosy future ahead of him.

You Instead is a okay film with a great soundtrack. Be prepared to be blown away by some great visuals but also be prepared for some lows due to a weakened script.

Other Subculture Media Reviews of You Instead: http://www.helium.com/items/2346049-movie-reviews-you-instead-2011.