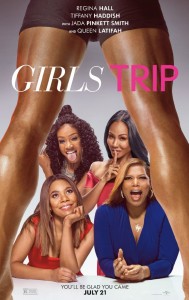 Comedies aimed at a female audience have proven to be very popular at the box office over the past few years. Some, like Bridesmaids and Pitch Perfect have been on song (excuse the pun) and worked wonderfully well. Then came Rough Night, the film that Hollywood hoped would be a female version of The Hangover, but it flops badly. Following on with that same goal we now have Girls Trip… a film that is head and shoulders above Rough Night.

The Flossie Possie started out in High School but have drifted apart over the years, but now they are back together and heading to New Oreleans where Ryan is the keynote speaker at a conference while her agent Elizabeth (Kate Walsh – Grey’s Anatomy, The Perks Of Being A Wallflower) works on a business deal that will see Ryan and her husband Stewart (Mike Colter – Luke Cage, Million Dollar Baby) become one of the richest celebrity couples in America. But with their marriage not as perfect as first seems and each of the members of the Possie dealing with their own demons this could turn out to be a very interesting weekend indeed.

As a film Girls Trip does hold up. The characters are instantly likable and for once a comedy gives you just enough back story for each of the characters to seem real, and even more importantly is there a no clichéd characters here. These important things all working with the screenplay and for director Malcolm D. Lee (Undercover Brother, The Best Man) means as an audience you find yourself barracking for these characters straight away.

What also works with the screenplay is the relationships between the characters. We get that there is tension between Sasha and Ryan without the screenplay having to spell it out in plain English for us. The script also allows for an interesting development between Ryan and Stewart by introducing his mistress, Simone (Deborah Ayorinde – Luke Cage, Game Of Silence) and then introducing a potential love interest for Ryan in the form of the almost perfect bass-player Julian (Larenz Tate – The Postman, Ray). The twisted four-way relationship never feels forced, which the screenwriters need to be congratulated about, and once again draws the audiences interest.

However, the major flaw of Girls Trip is that it feels like the screenwriters were never one hundred per cent sure what kind of comedy they were looking to make the film. There are witty lines and great moments of comedy that will make you laugh, Dina’s exchange with her boss as she is being fired is hilarious, but then when you suddenly find yourself watching a women pee on a crowd beneath her while she is on a zip line or another giving fellatio to a banana you find yourself wondering what are they trying to achieve here. These kinds of gags work in films like American Pie or The Hangover because they are constant, but there they seem out of place. Ironically it is when this film is showing moments of true heart and feelings between its characters that it works, that makes the outrageous comedic moments seem like an even stranger fit.

One of the main things that does work in favour of Girls Trip though is the performances of its cast. Everybody comes together really well and together Regina Hall, Queen Latifah, Jada Pinkett Smith and Tiffany Haddish are one of the best comedic ensembles that we have seen in quite a while. Hall brings are sensitivity to the film, Latifah brings heart and Haddish is there for the more outrageous moments. Then you have the utility – Smith who does a mixture of whatever each scene calls for. Then there is Larenz Tate who must be itching towards a headline role in a film soon, while Kate Walsh also delivers some of the film’s most funny moments.

Girls Trip does have a little issue with its comedic tone but for the most part this is a film that works pretty well. There are moments that will make you chuckle, which is more than you can say for a lot of comedies these days, while there is enough heart to win over any audience. If you’re looking for the perfect girls night out then Girls Trip should be number one on your list.

Bridesmaids pretty much set the standard for the R-rated raunchy girls misbehaving comedy, and we have seen a lot of these female centric versions of The Hangover. But subsequent films in this subgenre, like the recent Rough Night, Bad Sisters and even Sex And The City 2, have continually lowered the bar. And now we get to Girls Trip, an African-American variation on the girls behaving badly formula. But this is a dreary, offensive and largely unfunny comedy which, quite frankly, scrapes the faecal matter off the bottom of the barrel.

As with Rough Night the basic plot centres around the reunion between a group of female friends who were once tight in college, twenty years ago, who get together for a wild weekend. Known as the “flossy posse” they were known for their hard partying ways. Over the course of time though they drifted apart and haven’t seen each other for five years.

Ryan (played by Regina Hall) is now a successful author and self-help guru who supposedly has it all. She is married to Stewart (Mike Colter) a former football star and is about to sign a lucrative deal to host her own nationally syndicated television talk show and book deal. She has been asked to deliver the keynote address at the annual Essence Festival in New Orleans. So, for some reason she decides to get the flossy posse back together to share in her success.

Sasha (Queen Latifah) graduated with a degree in journalism but, strapped for cash, is now reduced to writing for a low rate gossip blog. She dishes the dirt on celebrities. Lisa (Jada Pinkett Smith) is a conservative, straitlaced divorcee, a helicopter mum who tries to protect her two children. She plays it safe and leads an unadventurous life and has to be talked into going to New Orleans with her former friends. And Dina (Tiffany Haddish) is still the wild child, the sexually aggressive hard partying type who hasn’t really changed her behaviour. She is unable to hold down a job because of her brash manner and a series of wrong choices.

Once the quartet hits New Orleans the ladies cut loose. However, before too long old resentments, lingering tensions and new revelations threaten the friendship and test their bonds. Sasha learns the truth about Stewart, who has been cheating on Ryan with seductive and well-endowed Instagram model Simone (Deborah Ayinode), and she has to choose whether to publish her scoop or remain silent out of loyalty to Ryan. Dina’s wild ways get them thrown out of a luxurious five-star hotel and they find temporary accommodations in a two-dollar hooker hotel. Cue plenty of drinking, brawling, crass sexual innuendo, and some frank dialogue, but little of it rings true.

Girls Trip has been written by a trio of writers, including Erica Rivinoja, who hails from a background in television and animated films; Kenya Barris (Barbershop: The Next Cut, and lots of tv work including Blackish); and Tracy Oliver (Barbershop: The Next Cut, etc). Directed by Malcolm D Lee, better known for Barbershop: The Next Cut and Scary Movie 5, Girls Trip gets the tone wrong from the start. As with Rough Night, I found it hard to believe that a successful character like Ryan would hang out with these losers by choice, especially at such a pivotal point in her career. This is fairly formulaic stuff, with plenty of the gross out humour and crude dialogue that we have seen before.

Most of the main characters are an unlikeable bunch, and the time spent in their company is tiresome. At an overly generous 122-minutes, the film is way too long for what it wants to say. Although this ode to sisterhood delivers some positive messages about friendship, female bonding, the joys of being single in the 21st century, and staying true to yourself, we have to sit through nearly two hours of dreck to get there. The film also explores issues of race, class and gender politics.

There is some surprisingly strong chemistry between the four leads though. Girls Trip reunites Latifah and Pinkett Smith twenty years after the both appeared in the heist thriller Set It Off. Hall delivers her usual solid performance here. Latifah always has a brash style and plenty of attitude, but here she often seems uncomfortable and doesn’t exactly bring her A-game. This is a breakout performance from Haddish, who delivers a volatile and scenery chewing performance as the unpredictable Dina, and she does bring some energy to the material, and virtually steals the film.

There are also lots of star studded cameos though from celebrities playing themselves. Girls Trip is a sub-Apatow like comedy, but it is largely unfunny, with too many flat spots and many supposedly humorous moments that are misjudged. The film hits a low point with a tasteless sequence set on a flying fox over New Orleans’ famous Bourbon Street that sets a new low for this kind of comedy.