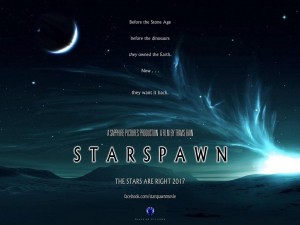 Hot on the heels of the succsess of Throwback director Travis Bain joins us to talk about his new project – Starspawn a project that you can all become involved with thanks to a recently launched Kickstarter campaign.

Also don’t forget to grab your copy of Throwback from Sanity, JB Hi-Fi or Amazon.

You can listen to or download our Starspawn Travis Bain interview right here.