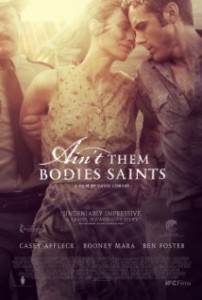 Summary: Outlaw couple Bob Muldoon (Casey Affleck) and Ruth Guthrie (Rooney Mara) find their crime spree at an abrupt end when they surrender after wounding a cop (Ben Foster) in a shootout. Four years later Bob escapes from prison in search of Ruth and their daughter, Sylvie, born after their arrest. Along the way, his past starts to catch up with him. Set in Texas in the early 1970s and opening at the place where most outlaw films end, Ain’t Them Bodies Saint is a lyrical and moody film about longing and absence

Written and directed by David Lowery (“St. Nick,” “Deadroom”) “Ain’t Them Bodies Saints” is set in Texas around 1970 and begins with lovers Ruth Guthrie (Rooney Mara – “Her,” “Side Effects”) and Bob Muldoon (Casey Affleck – “Out Of The Furnace,” “ParaNorman”) involved in a robbery and subsequent pursuit with police. After becoming holed up in an old farmhouse during the resulting shootout the pregnant Ruth shoots and wounds local police officer Patrick Wheeler (Ben Foster – “Lone Survivor,” “Kill Your Darlings”).

After he takes the blame for the shooting Bob is jailed for life. While in prison he writes to Ruth and their daughter every day and he annually tries to break-out of prison. On one attempt he succeeds and soon he is making his way across America to Ruth. While friends such as Sweetie (Nate Parker – “Red Hook Summer,” “Arbitrage”) are quick to help him he also has enemies wanting him dead and Police Officers desperate to catch him. Then of course there is the fact that Ruth is now fairly close to Patrick.

The work that Lowery delivers with “Ain’t Them Bodies Saints” is impressive. As a director he has mostly worked on short films so for him to produce a film of the caliber of this is a complete surprise. The film looks brilliant. Yes, Lowery has learnt so much of Malick’s filmmaking techniques on how to make a film look good, but he also has the knack for creating a good script which certainly helps it out there.

At times the film is slow, but that doesn’t mean that it drags. Lowery doesn’t muck around with spelling everything out for the audience nor does he waste a lot of time on back story, he just puts on screen what people need to know. The script will see audience members react in different ways – some will feel sorry for Bob, others will find themselves wanting to see Patrick and Ruth together. Whichever journey you decide to take though will be a pleasurable one as Lowery has created a gem of a film.

Lowery also takes some chances with the casting. Rooney Mara hasn’t always been as impressive as she was in “The Social Network.” She was well and truly below par in “Side Effects” while the studio set her up for a fall in the remake of “The Girl With The Dragon Tattoo” but her Mara silences her critics and shows that she certainly is a star on the rise. Her performance here is similar to the one that Michelle Williams so brilliantly delivered in “Wendy And Lucy.”

The other casting chances are with Ben Foster and Casey Affleck. Neither are really the kind of actor that you immediately think of being able to play the romantic lead but both step up well. Foster is extremely likable as Patrick Wheeler and it’s not hard to see why audience members will warm to him. Meanwhile Casey Affleck captures the same acting magic he did with his work on “The Killer Inside” and delivers another powerful performance.

“Ain’t Them Bodies Saints” is a brilliant piece of American cinema that really announces David Lowery as a director to watch. It looks stunning visually and has enough suspense to keep its audience interested throughout.