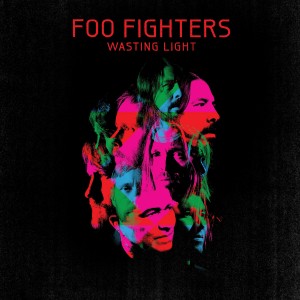 Nirvana and Foo Fighters’ fans will be rejoicing in unison as Dave Grohl certainly embraces his Nirvana roots with Wasting Light ,the Foo Fighters seventh studio album. Not only does Grohl invite Nirvana bassist Krist Novoselc on board for one song but Butch Vig is once again sitting in the producer’s chair. Grohl also welcomes Pat Smear back into the Foo Fighters fold.

Butch Vig sets out to separate the Foo Fighters from the pack by not allowing modern technology to “cramp” the Fooies style. Gone is the multi-million dollar recording studio (replaced with Dave Grohl’s garage), and gone are all the computers (instead Vig captures them using analog equipment). The resulting rawness is one of the things that makes this album so special.

Wasting Light has a haunting beginning with the opening line of “Bridge Burning” consisting of Grohl declaring ‘these are my famous last words’, eerie considering the album was released only days after the 17th anniversary of Kurt Cobain’s death. “Bridge Burning also sees the Foo Fighters get off to a brutal beginning, this is much heavier than what we have heard from The Fooies recently, however the melodic chorus also promises that Wasting Light is going to be something special.

It is easy to see that first single, “Rope” will instantly become a fan favourite, considering it is a million times better than their dismal last single “Wheels” that left a bad taste in a lot of people’s mouths. The greatness then continues with “Dear Rosemary” a sweet rock song that proves that the Foo Fighters still know how to write with emotion.

Wasting Light’s heaviness returns with “White Limo”, a track that sees Grohl give screamo-singers a run for their money. This should also silence those who have been saying that the Foo Fighters’ heavy days are well and truly behind them now. “White Limo” is followed by “Arlandia”, “These Days” and “Back & Forth”, three catchy rock tracks that will further endear Wasting Light to fans… it is also obvious that “These Days” should become a successful radio single if it is released.

The Fooies mix up “A Matter Of Time” with a splatter of both their heavy and soft sounds while Pat Smear’s return to the band is never more obvious than on “Miss The Misery” where he produces a classic rock guitar sound that many of the bands circa the 1970s and 1980s would be extremely proud of.

However the highlight of this album is “I Should Have Known” (the track which Krist Novoselic appears on). With Grohl, Novoselic and Vig in a studio together magic was bound to happen, and it certainly does here. If people are in doubt whether modern rock is still producing classic songs, then this is the track that they should be pointed towards.

Fans alarmed by Grohl’s opening statement can put their hearts and minds at ease when he sings “I never want to die. I’m here forever” on “Walk”. If the Fooies are going to continue releasing albums as good as Wasting Light then you can only hope that this statement is true, as you get the feeling that the best is still to come from these guys.

If the fact the Dave Grohl led Foo Fighters released their new album only days after the 17th anniversary of Kurt Cobain’s death didn’t already have starved fans already thinking back to Nirvana then certain facts about Wasting Light certainly will. See Grohl returns to his Nirvana roots big time this time. He once again teams up with producer, Butch Vig and even invites Nirvana’s bassist, Krist Novoselic back for a track. And for those who jumped on the Foo Fighters after the Nirvana days well you can rest easy knowing that Pat Smear is back in the fold.

Like he did with Nirvana’s Nevermind Butch Vig works some amazing magic on Wasting Light. He throws the computer out the window, records in Dave Grohl’s garage and captures the Foo Fighters the analog way, and it certainly does make a huge difference. This is the Foo Fighters as you have never heard them before.

Wasting Light kicks off with the brutal “Bridge Burning” which opens with Grohl eerily declaring ‘these are my famous last words’. Haunting, seeing the closeness of the anniversary of the death of Cobain. This is soon forgotten though as “Bridge Burning” has it brutal first verse switched to a melodic chorus that promises that this album will be something special.

First single, “Rope” will easily win over fans and is clearly one of the better Foo Fighters to surface in a long time, especially considering it follows the dismal, “Wheels” off their Greatest Hits album. The greatness then continues with “Dear Rosemary” a sweet rock song that proves that the Foo Fighters still know how to write with emotion.

“White Limo” sees Wasting Light’s heaviness return and shows that if its screamo that fans want then Dave Grohl can pull that off as well… this is an amazing effort by Grohl and clearly shows that the Foo Fighters can still match the competition when it comes to heaviness. This is quickly followed by “Arlandia”, “These Days” and “Back & Forth”, three extremely catchy rock tracks with “These Days” certain to become a radio single sometime soon.

“A Matter Of Time” sees the Foo Fighters mix the heavy and soft sounds remarkably well, while some expert guitar playing from by Pat Smear on “Miss The Misery” produces a classic rock sound that a lot of younger bands could learn a hell of a lot from.

However the highlight of this album is “I Should Have Known” which to be blunt is one of the finest rock songs ever recorded. This beautiful song is the track that Krist Novoselic makes an appearance on and its easy to see that he and Grohl (teamed with Vig) still have the chemistry to produce some special magic.

Wasting Light then closes with “Walk”, a track where Grohl sings “I never want to die. I’m here forever”. And when he is still creating albums as great as this we can only hope there is some truth in these lyrics.