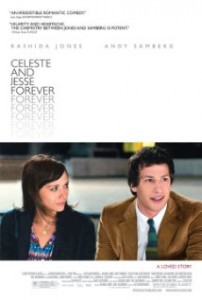 Celeste (Rashida Jones) and Jesse (Andy Samberg) met in high school, married young and are growing apart. Now thirty, Celeste is the driven owner of her own media consulting firm, Jesse is once again unemployed and in no particular rush to do anything with his life. Celeste is convinced that divorcing Jesse is the right thing to do — she is on her way up, he is on his way nowhere, and if they do it now instead of later, they can remain supportive friends.

Jesse passively accepts this transition into friendship, even though he is still in love with her.  As the reality of their separation sets in, Celeste slowly and painfully realizes she has been cavalier about their relationship, and her decision, which once seemed mature and progressive, now seems impulsive and selfish. But her timing with Jesse is less than fortuitous.

While navigating the turbulent changes in their lives and in their hearts, these two learn that in order to truly love someone, you may have to let them go.

A big congratulations needs to go out to director Lee Toland Krieger. Over the past few years so many directors have boasted that they will be the one to pull off an ‘alternative’ romantic comedy. A rom-com that doesn’t fall into the trap of being made up every cliché that Hollywood has come to use in the genre. Most of those directors have failed in their task but Krieger certainly hasn’t because ‘Celeste & Jess Forever’ is an alternative romantic comedy that works on all levels.

The film is out there from the very beginning. Celeste (Rashida Jones) and Jesse (Andy Samberg) are definitely not a couple in love. The teenage sweethearts are in the middle of a divorce but still trying to remain friends, something that their friends Beth (Ari Graynor) and Tucker (Eric Christian Olsen) find very strange and difficult to put up with.

Celeste begs Jesse to move on with his life but how will she react when he does exactly that with Veronica (Rebecca Dayan). Even worse is the fact that their split seems to be affecting Celeste’s work with popstar Riley (Emma Roberts) which is annoying her business partner, Scott (Elijah Wood).

There is that always present will they/won’t they tension between Celeste and Jesse but the screenwriting team (which also includes one of the stars – Rashida Jones) is never going to allow their audience to rest easy with Veronica certainly throwing a spanner into the works (that will come to a shock to the audience) and more than one guy interested in Celeste. But the real reason this script works is not only because this is some of the most naturalistic screenwriting since ‘The Secret Life Of Us’ but also because the finale is certainly not one of Hollywood’s clichés.

Credit must also be paid to the screenwriters for the fact that none of their characters are one-dimensional. Yes a lot of background info isn’t given for characters such as Beth and Tucker but just enough is given so that the audience gets a fair idea of what kind of character they are. Celeste and Jesse are also different to a lot of the central characters that you would normally find in a rom-com… but you could never say that they are so different that they are unrealistic.

‘Celeste & Jesse Forever’ is further strengthened by its cast. Rashida Jones announces herself as a real acting talent while Andy Samberg makes you forget about the horror that was ‘That’s My Boy’ with a genuinely funny but naturalistic performance… something that many thought would be beyond him. Cudos also to Elijah Wood who is almost unrecognisable as Celeste’s gay co-worker, Scott.

Hopefully ‘Celeste & Jesse Forever’ will show a new generation of romantic comedy writers that you can break the rules without causing the world to end. But for now just sit back and enjoy one of the best rom-coms you are ever likely to see.