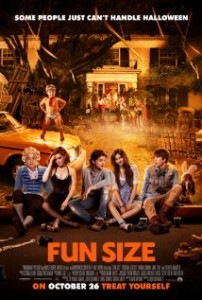 Summary: Wren (Victoria Justice) is on the verge of moving into the high school popularity stratosphere when she is asked to go to a Halloween party with the coolest guy in school. The only thing standing in her way is her style-cramping 8 year old brother who may just turn out to be even cooler than her date.

How do you put this nicely? ‘Fun Size’ is one of the worst films ever made! The film lacks so much direction it’s not even clear where it wanted to end up or even what kind of film it wanted to be. It tries to be ‘Superbad’ or ‘Harold And Kumar Go To White Castle’ but ends up being as wild as an episode of ‘Seventh Heaven’.

Wren (Victoria Justice) feels she has had a hard life since her father died, she has had to endure her mother, Joy (Chelsea Handler) having to date an immature 26-year-old old guy named Keevin (Josh Pence), and a younger brother Albert (Jackson Nicoll) who does nothing but annoy her with petty things.

When it comes around to Halloween Wren and her friend April (Jane Levy) are thrilled to get an invite to Aaron Riley’s (Thomas McDonell). But when Wren is left looking after Albert and accidentally loses him the pair are left driving around with ‘geeks’ Roosevelt (Thomas Mann) and Peng (Osric Chau).

So bad is ‘Fun Size’ that director, Josh Schwartz and screenwriter, Max Werner should be allowed to make another film ever again. The film lacks all forms of humor and while the inclusion of characters such as Fuzzy (Thomas Middleditch) tries to lift the film into Kevin Smith territory it fails on all levels. You can see the moments where the audience is supposed to laugh but instead you can only hear the tumbleweeds blow through the cinema.

Even worse is the fact that the script loses itself. There is far too much time spent on Joy’s time with Keevin at her party when the main focus needs to be on Wren. Likewise there are huge chunks of the film that doesn’t make any sense. For example, does anyone believe the police would arrest Albert for letting off a firework when Jurgen (Johnny Knoxville) has manhandled him, locked him up and then asked for a ransom?

And just to make the film even more of a mess it seems the characters of Roosevelt and Peng are like walking clichés from ‘Not Another Teen Movie’.

Acting-wise, Victoria Justice should just use this as a vehicle to get other work… as long as she’s brave enough to include this dud on her resume, while Thomas Mann announces himself as the new Michael Cera. As for the other actors… well there is nothing there for them to really be proud of.

Unless you are looking for a way to punish yourself, avoid ‘Fun Size’ at all costs.

Other Subculture Media Reviews of ‘Fun Size′: Check Episode #10 of our The Good The Bad The Ugly Podcast for a more in-depth review of ‘Fun Size’