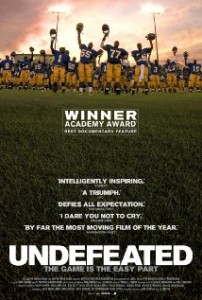 Summary: Winner of Best Documentary at the 2012 Academy Awards, ‘Underfeated’ is an intimate chronicle of three underprivileged student-athletes from inner-city Memphis and the volunteer coach’s mission to help them beat the odds – both on and off the field. The 2009 Summer/Fall football season promises to be the Tigers’ best ever – perhaps the season that finally breaks the 110 year-old playoff jinx. It’s the senior year for the team’s star player, O.C., a left tackle blessed with power, size and speed. With football scholarships hanging in the balance, O.C. will have to juggle practice with the study sessions he needs to pass crucial exams. Also playing his last season is undersized offensive lineman Montrail – known to all as ‘Money’ – an earnest honors student hoping to score an academic scholarship. For Chavis, a talented linebacker in his junior year, the challenge of 2009 lies in keeping his explosive temper in check – something the willful teenager isn’t always interested in doing. As the football season intensifies, tensions mount and tempers fray, it’s up to the tireless efforts of Coach Bill Courtney to keep each player focused on one thing – his future..

Dave Griffiths’s review of ‘Undefeated’ can be found at http://www.helium.com/items/2394720-undefeated-movie-review