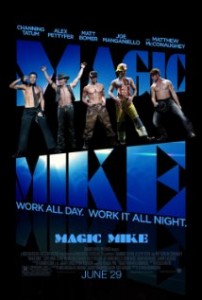 Summary: Set in the world of male strippers, Magic Mike is directed by Steven Soderbergh and stars Channing Tatum in a story inspired by his real life. The film follows Mike as he takes a young dancer called The Kid under his wing and schools him in the fine arts of partying, picking up women, and making easy money.

Magic Mike became a whipping boy before it even reached the cinema. There wasn’t a comedian or even film-lover who wasn’t cracking jokes about how bad a film that tells the story of Channing Tatum’s life was going to be. But one man has saved this film from becoming a complete joke, that man is director Steven Soderbergh (Haywire, Contagion). With Magic Mike Soderbergh once again shows that no matter what the topic he can make a film look good.

As previously mentioned Magic Mike is a semi-autobiographical look at Channing Tatum’s (21 Jump Street, The Vow) time spent as a stripper. Here Tatum plays Magic Mike the lead star of Dallas’s (Matthew McConaughey – Mud, The Paperboy) crew of strippers that are quickly raking in the big bucks for him.

After meeting him on a worksite Mike introduces Adam (Alex Pettyfer – In Time, Beastly) to the crew and soon he too finds success. But as the dark side of stripping raises his head and Mike finds himself attracted to Adam’s sister, Brooke (Cody Horn – Occupant, Violet & Daisy), Mike wonders if it’s time to start a new career path.

There is no point saying Magic Mike is a terrific film, it’s not as it has some major flaws, but it is still a lot better than the train-wreck many predicted it would be. Soderbegh uses his alternative style of filmmaking to achieve the best effect out of the sometimes dramatic storyline but still the film falters as it relies too heavily on dance scenes to move the story along, and then frustratingly seems to hold back when the storyline begins to delve into some of the more gritty elements.

For example Dallas is set up as a somewhat dangerous guy. There is a brilliant scene where he confronts Mike about his intentions yet when called upon to do so the threats seem to go nowhere which seems completely out of line with Dallas’ character. Likewise the drug-side of the storyline is just skirted on when it really should have been a main focus.

The one thing you can’t fault Magic Mike for however is the acting. Channing Tatum finally steps up and shows that he does have some acting talent to go along with his dancing ability while Cody Horn shows that she is certainly an actress to watch in the future. But the star of Magic Mike is Matthew McConaughey who puts in a blinding dramatic performance (and shows that he is well ripped for a 40-year-old) that shows as a character actor he is certainly back in the game.

Magic Mike isn’t as cheesy as some would have expected. It’s a good watch that you feel could have been even better.