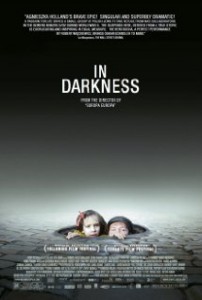 Summary: Leopold Socha, a sewer worker and petty thief in Lvov, a Nazi occupied city in Poland, one day encounters a group of Jews trying to escape the liquidation of the ghetto. He hides them for money in the labyrinth of the town’s sewers beneath the bustling activity of the city above. What starts out as a straightforward and cynical business arrangement turns into something very unexpected, the unlikely alliance between Socha and the Jews as the enterprise seeps deeper into Socha’s conscience.

Over the years there have been some heart-wrenching films about the Holocaust. Joining that long list comes new thriller In Darkness which sees director Agnieszka Holland (TV’S The Killing & Treme) mix just the right amount of characterization, story and suspense to make this an excellent watch.

Based on a true story In Darkness begins with sewer worker Leopold Socha (Robert Wieckiewicz – Courage, Maiden Vows) and his colleague, Szczepek (Krzysztof Skonieczny – Yuma, Maraton Tanca) viewing the war as the perfect opportunity for them to commit a number of robberies in a bid to bring in extra wages.

Then when Socha meets up with Bortnik (Michal Zurawski – Kac Wawa, Los Numeros), an old friend who is now part of the Ukrainian Militia (who have teamed up with the Nazis) he learns that money can be made hunting down Jews and turning them over to the officials.

However, when Socha finds a group of Jews desperate for escape his plan changes when they offer to pay him to hide them in the sewers. Despite the threat to himself, his wife Wanda (Kinga Preis – Rose, Suicide Room) and Szczepek he decides that hiding them is the best thing to do.

One of the things that makes In Darkness such a fascinating watch is the brilliant way that screenwriter, David F. Shamoon (newcomer) brings the characters to life on the screen. Unlike some Holocaust films in the past he gives the Jewish characters really characterization and personalities. He even takes the huge gamble of having some unlikeable characters (such as a cheating husband and a drug addict), but despite this they are characters that the audience come to love and care for. The fact that this occurs makes the directors job of building suspense even more easy, as there is no way any audience member wants to see anything bad happen to these characters.

Of course Holland also finds other ways to build the suspense. The way he captures the claustrophobic feel of the sewers is enough to make anybody feel at unease and at times the high drama of the film literally has the audience gasping for breath.

Holland has also picked an incredibly cast for In Darkness and while all the performances are extremely high credit must be paid to Robert Wieckiewicz who is brilliant throughout. He is also well supported by Kinga Preis who plays his onscreen wife.

In Darkness is a gut wrenching film that is equal to Schindler’s List when searching for a truth-based Holocaust film.

Other Subculture Media Reviews of ‘In Darkness’:
http://www.helium.com/items/2354094-movie-reviews-in-darkness-2011