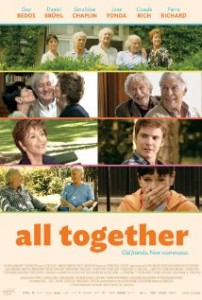 Summary: Annie, Jean, Claude, Albert and Jeanne have been friends for more than 40 years. So when memories let them down, heart rates quicken and their families plot their futures in retirement homes they decide to rebel and all live together. To help make their lives a little easier they hire young student (Daniel Br hl), who is initially a quiet observer but is soon drawn in to the group dynamic. Their new communal lifestyle provides plenty of surprises, challenges and adventure but soon stirs up memories and hidden secrets from years gone by. In order to find happiness together in their golden years the five friends must come to terms with their past, their mistakes, and their limitations. This charming and moving story proves that youthful exuberance and happiness can be found at any age, with a little creative thinking.

Dave Griffiths’s ‘And If We All Lived Together’ Review:

And If We All Lived Together sees the French produce a racier version of the great The Best Exotic Marigold Hotel with differing results. On one hand the film’s characterization makes for a joyful watch, but on the other hand there are several aspects of the film that are a real let down.

Directed by Stephane Robelin (Real Movie, Pile ou Face) sees a group of people who have been friends for over forty years decide to move in together in a bid to look after each other.

Each person is very much an individual despite the fact that they are in the later stages of their life. There is Jeanne (Jane Fonda – Georgia Rule, Monster-In-Law) who is seriously ill and refusing treatment or to tell anyone how sick she is. Then there is her husband, Albert (Pierre Richard – Le Grande Restaurant, Le Mystere) whose dementia makes him extremely difficult to live with.

Then there is the second married couple, Jean (Guy Bedos – Moi Michel G Milliardaire Maitre Du Monde, Survivre Avec Les Loups) and Annie (Geraldine Chaplin – Hostias, O Apostolo) who always seem to be fighting and then making up, they literally seem to disagree on everything.

Last but not least comes Claude (Claude Rich – Final Flourish, Bancs Publics) who despite his age has an insatiably sexual appetite. Keeping them all in line is young university student, Dirk (Daniel Bruhl) who is also studying the group for his thesis.

Some parts of Stephane Robelin’s script are absolutely sensational. The fact that the film is so well written that you instantly fall in love with the characters is a big plus, as is the fact that its willing to tackle some serious social taboos, but And If We All Lived Together never becomes as truly great as it could have been because of a seriously disappointing finale that almost makes you want to scream at the screen.

Also making this a great watch is the fine performance from Jane Fonda who has actually been missing from the big screen for four years now. She leads an amazing ensemble with a performance that is clearly Oscar worthy. Her touching scenes with Daniel Bruhl are one thing that will certainly remain in your memory after you have left the cinema.

Other Subculture Media Reviews of ‘And If We All Lived Together: http://www.helium.com/items/2348163-movie-reviews-and-if-we-all-lived-together-2011.