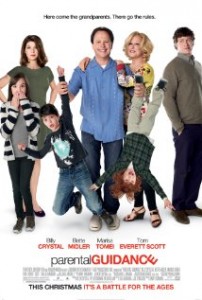 Summary: A married mom asks her parents to look after her three children when she needs to leave town for work.

Take a look at the poster of ‘Parental Guidance’. Did I miss the time warp back to the 1980s? Am I supposed to pull out the happy pants and slap a happy-slapper on my arm? Maybe I’m wrong but ‘Parental Guidance’ seems to have surfaced a little too late (like thirty years too late) because with this cast, and these jokes it could have done awfully well back in 1985.

‘Parental Guidance’ sees Artie Decker (Billy Crystal – Small Apartments, Tooth Fairy) losing his beloved job as a baseball broadcaster. With his life in freefall his wife, Diane Decker (Bette Midler – Cats & Dogs: The Revenge Of Kitty Galore, The Women) feels the best medicine is to answer the call from help from their daughter, Alice Simmons (Marisa Tomei – The Ides Of March, Crazy Stupid Love) and her husband, Phil (Tom Everett Scott – Santa Paws 2: The Santa Pups, TV’S Good Christian Bitches), who need to go to a work conference but have no-one that can stay at home and look after their children.

While it seems quite simple for some grandparents to look after their grandchildren the big problems are the fact that Artie and Diane rarely see Harper (Bailee Madison – TV”S Holliston & Once Upon A Time), Turner (Joshua Rush – Playing For Keeps, TV’S Teens Wanna Know) and Barker (Kyle Harrison Breitkopf – TV’S Being Human & Against The Wall) and while Alice and Phil run their household using modern family techniques Artie and Diane are certainly part of the old school way of doing things.

While ‘Parental Guidance’ seems like it may come from the 1980s it suffers from the same problem that so many modern comedies seem to do these days, and that is the fact that it just isn’t funny. The film tries for laughs many times but each time it fails miserably and at the end of the day director, Andy Fickman (You Again, Race To Witch Mountain) has delivered yet another dog of a film.

At times ‘Parental Guidance’ does threaten to be an okay film. The idea of some old school parents clashing with the new generation’s parental skills seems like it should work but the film’s laughs just never come and the inclusion of people such as Tony Hawke really does leave you with a feeling that the writer’s never really left the 1980s.

As a sign at just how bad ‘Parental Guidance’ really is the lead actors are outacted by the kids all the way. Billy Crystal really shouldn’t have come out of retirement for this rubbish while Marisa Tomei and Bette Midler seem to have been instructed to ‘just look pretty and whatever you do don’t act’.

One of the unfunniest comedies you are ever likely to see, ‘Parental Guidance’ is not even worth a look.