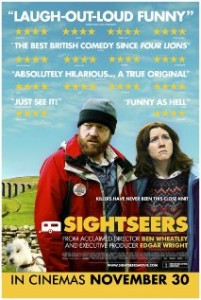 Summary: Chris (Steve Oram) wants to show Tina (Alice Lowe) his world and he wants to do it his way – on a journey through this sceptred isle in his beloved Abbey Oxford Caravan. Tina’s led a sheltered life and there are things that Chris needs her to see – the Crich Tramway Museum, the Ribblehead Viaduct, the Keswick Pencil Museum and the rolling countryside that separates these wonders in his life. But it doesn’t take long for the dream to fade. Litterbugs, noisy teenagers and pre-booked caravan sites, not to mention Tina’s meddling mother, soon conspire to shatter Chris’s dreams and send him, and anyone who rubs him up the wrong way, over a very jagged edge.

In the past many filmmakers have tried their hardest to create the perfect horror/comedy. Through the years we’ve seen so many of those filmmakers fail miserably, of course the Brits showed us they could do earlier this year with the brilliant ‘Inbred’, and now they have done it again with a surprising Boxing Day release, the equally funny and horrific ‘Sightseers’.

Playing out like a twisted romantic-comedy ‘Sightseers’ sees the innocent Tina (Alice Lowe – TV’S Ruddy Hell! It’s Harry And Paul & Skins) having to live her life cooped up with her mother, Carol (Eileen Davis – The Holding, Pulse), and things seemed to have gotten worse as Carol has aged. Now she plays on the fact that she is getting frail as a way to keep Tina around the house. She now also has guilt on her side as a tragic accident, partly caused by Tina, resulted in the death of their beloved dog.

But things are about to get a shake up for Carol because Tina now has a boyfriend, strange but nice on the outside Chris (Steve Oram – Kill List, Curtains). Much to the horror of Carol Steve suggests a caravanning holiday to Tina so that he ‘can show her his world’. Finally free of her mother Tina thinks the holiday will be a lot of fun but she doesn’t plan on it turning as deadly as it does.

Director, Ben Wheatley (The ABCs Of Death, Kill List) has taken the script that stars Alice Lowe and Steve Oram have created and put together one of the funniest comedy-horrors you are ever likely to see. One moment the film will have you laughing out loud due to its outrageous black comedy and the next you’ll be laughingly guiltily as someone is bludgeoned to death as the wise quips just keep coming.

The key to ‘Sightseers’ working falls in the writing. So well set up are the characters of Tina and Chris that you can’t help instantly liking them and that doesn’t seem to change even when they are travelling across the British countryside killing any ‘wankers’ that Steve feel are worthy of meeting an early demise.

Aside from the writing it is the great comedic performances of Lowe and Oram that also make the characters so likable. Oram plays the lovable serial killer eerily well while Lowe announces herself as a genuine comedic genius.

It may be one of the smaller releases this Boxing Day but ‘Sightseers’ is also one of the most gruesome… and best.