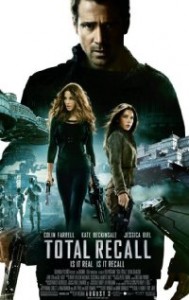 Summary:A factory worker, Douglas Quaid, begins to suspect that he is a spy after visiting Rekall – a company that provides its clients with implanted fake memories of a life they would like to have led – goes wrong and he finds himself on the run.

It seems most sci-fi fans are worried that the 2012 remake of Total Recall will be nothing like the original because it doesn’t have Arnie. Perhaps what they should be more worried about is the fact that the remake doesn’t seem to have a soul. Changes are most cinema goers will be won over by its sleek production design but if they dig a little further they’ll soon realise that this film has as much heart as the Tinman.

Total Recall is set in the future at a time when the Earth only has two countries fit for habitat, The Colony (Australia) and The United Federation of Britain. The two ‘colonies’ are on the brink of war with each other with Chancellor Cohaagen (Bryan Cranston – Rock Of Ages, TV’S Breaking Bad) from the UFB claiming that Matthias (Bill Nighy – Wrath Of The Titans, The Best Exotic Marigold Hotel) from the Colony is a terrorist hell-bent on destruction. In the middle of the disagreement are people such as Douglas Quaid (Colin Farrell – Fright Night, Horrible Bosses) a factory worker who travels from the Colony through the Earth to the UFB for work each day.

Quaid’s mundane life with his wife Lori (Kate Beckinsale – Underworld: Awakening, Contraband) soon gets a jolt of it’s own however as he tries to find some meaning for his life by going to a place called Rekall (despite advice from his best friend Harry (Bokeem Woodbine – Letting Go, TV’S Southland) not to), a centre that provides memories for a cost. Quaid’s attempt soon sees him being accused of being a spy and then being hunted down by his wife while being helped by the mysterious freedom-fighter Melina (Jessica Biel – The Tall Man, New Years Eve).

Director Len Wiseman (Die Hard 4.0, Underworld: Evolution) does a great job making this film look good. He goes for the similar always raining, always dreary look that he did so well with the Underworld franchise. He also directs the fight scenes in the same Underworld style, Kate Beckinsale’s groin take-down of Colin Farrell is a ripper, but it does feel that Wiseman is the only one lifting his weight.

The production design team seem to have been doing a lot of DVD watching because they have ‘borrowed’ a stack of things from Star Wars: The Phantom Menace, Blade Runner and The Fifth Element while the quite large script writing team did no service to Philip K. Dick’s short story at all. Instead of having the audience in suspense over whether the events that are occurring on screen are really happening or are just part of Douglas’s Rekall experience the script literally screams “THIS IS REALLY HAPPENING, YES IT IS!!!” while Lori may be set up as a top notch cop but most of the time throughout the film she seems inept at her job and seems to mutter ‘shit’ hell of a lot.

The poor actors really had very little to work with at all. Beckinsale’s talents are completely wasted while poor Jessica Biel’s character of Melina had no characterization whatsoever, despite the fact she is one of the film’s most important characters. The only member of the cast to get anything out of Total Recall at all was Colin Farrell who at last got the opportunity to remind the world that he is an action hero who is capable of delivering dramatic lines… sadly cheesy ones seem to outnumber his dramatic ones here though.

Total Recall does win you over with its great visuals but the fact it has no substance will most likely mean you won’t be watching it over and over.