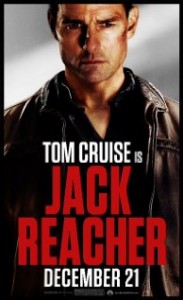 Summary: One of the most compelling heroes to step from novel to screen: ex-military investigator JACK REACHER. When a gunman takes five lives with six shots, all evidence points to the suspect in custody. On interrogation, the suspect offers up a single note: “Get Jack Reacher!” So begins an extraordinary chase for the truth, pitting Jack Reacher against an unexpected enemy, with a skill for violence and a secret to keep.

You have to feel for Tom Cruise. Over the years he has done nothing but deliver brilliant movie after brilliant movie yet he still considered a public pariah and comedians are always lining up to have another go at him. His fans however have relished in the fact that movies such as those in the ‘Mission Impossible’ franchise have only gone further to enhance him as a true action hero… now that stature is about to be justified even further with ‘Jack Reacher’.

Lifted straight from the series of novels created by Lee Child, Tom Cruise (Rock Of Ages, Mission Impossible: Ghost Protocol) plays Jack Reacher an ex military cop who disappears from the face of the Earth and then re-appears when somebody is in need of his help.

The people needing his help this time round are alleged mass-murderer Barr (Jospeh Sikora – Safe, TV’S Boardwalk Empire) and his defence lawyer, Helen Rodin (Rosamund Pike – Wrath Of The Titans, Devil You Know). Barr has been blamed for a random mass murder that has left a number of people killed, and sadly all the evidence found by Homicide Detective Emerson (David Oyelowo – Lincoln, The Paperboy) seems to point at Barr, but Barr isn’t going to go down without a fight and just before he is placed in a coma due to a in-custody beating he hands Emerson a note that says ‘get Jack Reacher’.

With the audience already knowing that the shooting was done by a hit-man organized by The Zec (Werner Herzog – TV’S Metalocalypse & The Simpsons) the suspense is raised when Emerson seems to take an instant disliking for Reacher whose knack of getting into trouble seems to make Emerson’s job even easier. With Helen eager to ‘defeat’ her D.A. father (Richard Jenkins – The Company You Keep, Killing Them Softly) she knows she has to keep Reacher on the straight-and-narrow in order to have any chance of defending Barr at all.

The fact that the audience knows who the killer is from the very start would make you think that the film should lack a little bit of suspense but luckily director/screenwriter Christopher McQuarrie (The Way Of The Gun) knows what he is doing and instead he shifts the suspense on to whether or not Reacher is going to be brought down by a corrupt Police Officer.

McQuarrie’s script works amazingly well (a lot better than a lot of crime thrillers) and in the end the film ends up feeling like you are watching an episode of ‘N.C.I.S.’ mixed in with the action of ‘Mission Impossible’. Obviously Cruise was impressed was McQuarrie’s work on the film because it looks like he will be handed the directing reigns of ‘Mission Impossible 5’ and is currently writing the script for ‘Top Gun 2’.

As previously mentioned Cruise is a real standout in ‘Jack Reacher’. There are few actors that have the ability to pull off physical stunts and then delivered a powerful dramatic performance the way that Cruise can… and here he is in his element. Poor Rosamund Pike and David Oyelowo are reduced to being ‘back drops’ as Cruise puts in one of his better performances. The only actor who comes close to him is Robert Duvall (Jayne Manfield’s Car, Hemmingway & Gellhorn) and the scenes between them are sensational to watch.

‘Jack Reacher’ is one of the best written crime thrillers to surface for a long time and while the opening of the film seems to have upset a few Americans nobody should put off seeing the film because of it. ‘Jack Reacher’ is a must see.